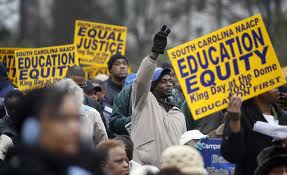 WASHINGTON (AP) – The NAACP is going on the offensive on education, deploying volunteers across the country in its biggest push for a public education overhaul since the nation’s classrooms were ordered desegregated in 1954, the civil rights group said Thursday.

The volunteers, who have been trained for the past two years, will lobby at the state and county levels for four educational priorities:

– Better targeting of spending to the neediest of students

Such changes for all children, not just minorities, are the only way to ensure an educated American workforce and a thriving economy, said NAACP president and CEO Ben Jealous.

“We will always play defense on Brown (vs. Board of Education),” Jealous said, invoking the 1954 Supreme Court decision that ended legal school segregation and became a civil rights milestone. “We will always play defense when folks who are disproportionately disciplining our children harshly in ways that do not help them. You know what we are playing offense on? We are playing offense on these four things.”

“Maybe when this country was founded, you could get away with only educating a portion of your population and succeed in the world, but you can’t do that anymore,” he added.

The current education system is leaving out hundreds of children of all races, said Education Secretary Arne Duncan, who gave his support to the NAACP agenda.

Twenty-five percent of all children, about 1 million children, drop out of school each year, Duncan said. In the African American and Latino communities, he said, the number is closer to 40 percent to 60 percent.

“This is not just devastating individuals and families. This is devastating entire communities,” Duncan said.

Duncan and others said a system with those kinds of results puts the nation at a competitive disadvantage. But if the NCAA could ban the University of Connecticut’s men’s championship basketball team from postseason play next year because of poor athlete graduation rates, Duncan said, surely activists could take on “this sacred cow.”

Jealous said for most of his life the NAACP has focused on implementing and defending the Supreme Court’s desegregation decision. But increasingly, branches of NAACP in 38 states have pushed for changes in education laws and legislation, he said.

For example, Adora Obi Nweze, president of the Florida state NAACP conference, helped push for reform of “zero tolerance” laws that governed school discipline in her state. She said the Florida conference was successful in getting the law modified so other steps must occur before a student is suspended, expelled or arrested.

Jealous said volunteers have been trained to be able to make presentations to a local Baptist Church and to a local Kiwanis Club so the reforms will not be perceived as only benefitting African American children.

He emphasized that the report released Thursday was not another study, but a plan. Volunteers were trained for two years in the tenets of the report, which was based on two years of research about what makes the best schools perform so well.