Albania Will Extend Citizenship to All Ethnic Albanians 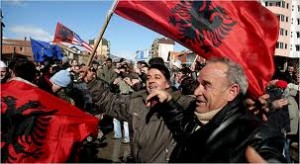 Sali Berisha told a cabinet meeting Tuesday that Albanians in Albania and Kosovo should “feel as one” – while having two separate governments. He insisted that the move will not cause friction with neighbors.

Last week, Berisha angered neighboring Greece by referring to “Albanian lands” in Greece, Serbia, Macedonia and Montenegro. His spokeswoman later said he was referring to the past.