Are Hate Groups Behind the Secessionist Movement? 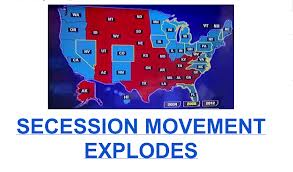 Other than a little saber rattling by Texas Governor Rick Perry in 2008, little talk of secession has been heard in today’s society until President Barack Obama won his second term in office on November 6, 2012. By November 14 the LA Times http://www.latimes.com/news/politics/la-pn-white-house-secession-50-states-20121114,0,4408092.story confirmed that all 50 states had posted petitions to secede “peacefully” from the Union on the White House website. Odd, isn’t it that these petitions could come from citizens in some of the same states that gave the President a decisive victory over his GOP opponent?

Can such a sudden and sweeping desire by states to secede from the Union be blamed entirely on the propensity of the GOP to be sore losers? Doubtful, since Republicans have lost about half of the Presidential elections since the nation was established. Yet this is only time since the Civil War in 1861 that our unity as a nation has come under siege. Could it be that the rapid rise of Patriot and Militia Hate Groups is fueling this movement?

The Southern Poverty Law Center http://www.splcenter.org/blog/2012/11/14/radical-right-joins-in-secession-frenzy/contends that this is exactly what is happening. The states of Alabama, Florida, Georgia, Idaho, Louisiana, North Carolina, Tennessee and Texas are the states with the most signers. Not only are these “red” states, but they are the states that are home to the present and past leaders of racist hate groups. One has only to look at the posted graph to notice that the membership and proliferation of these groups skyrocketed in 2011, the same year that the presidential campaigns swung into high gear. Stormfront, http://www.stormfront.org/forum/t538924/  the first major hate site on the Internet, appears to be spearheading the attempt to dismantle the nation. Stormfront’s leader states in his introduction to the website that the nature of the problem is that, “White people who come here are understandably upset at how somebody like Obama (i.e., a left wing extremist with a mysterious and shadowy background who seemingly comes out of nowhere) could win the presidency. They also see how Blacks are gloating over Obama’s victory. These Whites want a strong opposite reaction to counter it.” The site urges secession on a number of comment threads. “We need to form a WHITE republic,” one commenter declares, “One that is for whites by whites!”Southern Poverty Law http://www.splcenter.org/get-informed/intelligence-report/browse-all-issues/2012/spring/the-year-in-hate-and-extremism reports that Stormfront is but one of the 1600 plus Patriot and Militia groups operating today in the U.S. A staggering 755% growth of these groups from 2008-2011 signals a gearing up of the racists and anti-Semites in response to a black man in the White House. Angry and activist, these haters have riled the otherwise peaceable conservatives to call for secession from the land that they love, and like lambs to slaughter, they are flocking to this virulent cause.