Are the Attacks on Susan Rice a Show of Racism? 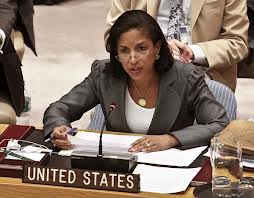 If President Obama nominates Susan Rice to succeed Hillary Clinton as Secretary of State she will be the second African-American woman to occupy the job. Condaleeza Rice was the first. Nonetheless, liberals point to the fact that every prominent person of color in the Obama Administration has been targeted for ridicule by the GOP, and can’t help but wonder out loud if the unrelenting criticism of Susan Rice is one more covert expression of racism.

Now it appears the conservative right wing has not only doubled down on their criticism of a woman with a stellar background of service to her country, but they are also enraged that allegations of racism and sexism have been linked to their venomous attacks. Sarah Palin, as reported by the Huffington Post http://www.huffingtonpost.com/2012/12/01/sarah-palin-susan-rice_n_2224326.html responded, “What the heck does this have to do with gender, or skin color, or anything else? This has to do with competency, and Susan Rice”s handling of Libya has been part and parcel of the Obama Administration”s handling of Libya, which has been appalling.”

Ms. Palin makes a point. Race and gender should not play a role in deciding upon the competence of an individual, but it remains difficult to believe that stereotypical perceptions are not at play in the persecution of Dr. Rice. “It”s been atrocious, and it”s really indicative of a lack of competency and truthfulness, and certainly transparency, in the entire Obama Administration. It has nothing to do with her gender,” Ms. Palin asserted.

It is interesting that Ms. Palin doesn’t directly defend the rhetoric as non-racist, but simply non-sexist. Think for a moment about the most popular stereotypes about black people throughout our country’s history. Perhaps you have heard that this population is sneaky, secretive, and lacking in the intelligence to react responsibly when given a complex task. Is it a sheer coincidence that Eric Holder, Van Johnson, Valarie Jarrett, and Barack Obama have been the victims of similar allegations? Does the fact that similar comments were not made about Condaleeza Rice negate the presence of racist ideation at work to undermine Dr. Susan Rice’s appointment?

The Daily Caller http://dailycaller.com/2012/11/29/susan-rice-in-1986-book-make-white-students-learn-black-history/ sites a 1986 book written by Susan Rice during her college years as an attempt to “afrocate” white children because she advocates for Black history to be taught to all U.S. school children. So there it is, a loud, overt declaration that what really bothers the GOP about this potential nominee. It is not her incompetence so much as it is her radical “blackness” that they see as the greatest threat if Dr. Rice gains more power.

Nothing racist there, right?