Asian American Votes Up For Grabs In Political Parties 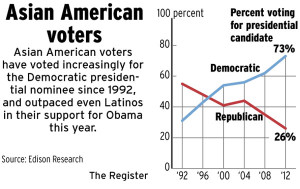 According to the May 8 Census report, Asians who voted between 2008-2012 rose by about 550,000, but a large majority of Asian American votes are up for grabs.

Among the survey findings: Two-thirds of Asian Americans and Pacific Islanders voted for President Obama, yet about half are actually independent or do not think in terms of a political party, so those Asian American votes are up for grabs in upcoming elections.

“The parties and other voter mobilizing organizations must invest in linguistically and culturally appropriate outreach to engage our communities for future elections,” said Christine Chen, executive director of APIAVote.

Asian Americans and Pacific Islanders makes up about 4.8 percent of the U.S. population, but  they comprised only 3 percent of U.S. voters in 2012, that number increased 128 percent from 1996 to 2008. That is bound to change. Studies show political strategists on both sides of the aisle agree that the Asian community remains persuadable by either party. And even in late September 2012, President Obama had 43 percent of the Asian American community, compared to 24 percent favoring Mitt Romney. In this photo, President Obama speaks to an increasingly powerful Asian American demographic last May. Photo Credit: Official White House Photo/Pete Souza

“This projected milestone reflects the mix of our nation’s declining fertility rates, the aging of the baby boomer population and continued immigration,” said Thomas Mesenbourg, the Census Bureau’s senior adviser.