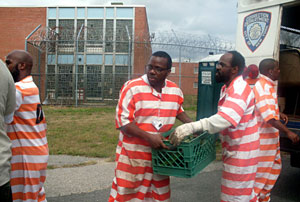 One in nine Black men between the ages of 20-34 are incarcerated compared to one in 30 non-black men of the same age according to a 2008 Pew study. The prison industrial complex is profiting greatly on the backs of black men who find themselves on the wrong side of the law, and there is no end in sight. Driven by laws that put more black men in prison, and extend their stays once they arrive, free labor is provided in abundance for those who own a piece of the prison action.

Inmates produce items or perform services for almost every major industry. They sew clothes, fight fires, and build furniture, but they are paid little wages, somewhere between five cents and two dollars per hour. The Final Call reveals that the phone companies who charge high amounts for collect calls then strip even this meager salary from inmates.

Families of inmates are not allowed to send direct care packages anymore. Inmates must purchase products directly from companies. “Prisoners make their clothes and bedding in sewing factories and about 90 percent of the items they use in the prisons,” said Nathaniel Ali of the National Association of Brothers and Sisters In and Out of Prison (NABSIO).

While prisons cost taxpayers huge amounts in revenues—the State of Californiaestimates the cost to taxpayers is $47,000 per year per inmate–unfortunately, little of those funds are spent on the inmates. Over two-thirds of these costs are for security and inmate healthcare. In other words, most of the money is going to prison employees. The prisons spend only about $4000 on rehabilitation, education, and inmate support (food, clothing, and religious activities).

This explains the proliferation of private prisons in the U.S. The ACLUreveals that the business models of “for profit” prisons depends on locking up more and more people. “As incarceration rates skyrocket, the private prison industry expands at exponential rates, holding ever more people in its prisons and jails, and generating massive profits.

In addition to the massive profits, the current incarceration rate deprives record numbers of individuals of their liberty, disproportionately affects people of color, and has at best, a minimal effect on public safety.”What do you call it when the system holds people, often unjustifiably, forces them to work without compensation, have only their most basic human needs provided for, and have little hope of ever leading a self-directed life in the future while the system rakes in the cash?

The new Jim Crow? The new institution of slavery?