CCA Rakes In Prison Profits On Imprisonment Of Minorities 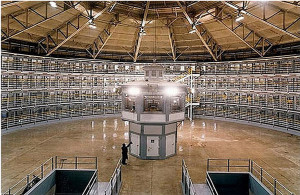 Profits at the Corrections Corporation of America, the largest owner of private prisons in the nation, were so outstanding this year the company recently moved to institute a special dividend just to pay off all its shareholders in an orderly fashion.

CCA raked in more than $675 million in profits in its latest filing, as the trend of imprisoning more and more black and Latino victims for longer stretches in the name of securing cheap and controlled labor took on even more heartless effects. Since the mid-1990s, revenues increased five times over at the Tennessee-based company.

Overall crime has receded now for nearly a generation, yet at no time in domestic history has there been more people incarcerated than the well over 2 million now housed at countless facilities. Although the U.S. constitutes just 5 percent of the world populous, it accounts for 25 percent of the worldwide prison population.

In all, CAA operates 67 penal institutions with a total capacity of 92,500 beds in 20 states and the District of Columbia. To ensure a continuation of the record-making profits the company just secured, the company requires states to maintain a 90 percent occupancy rate at all of its facilities.

As the Great Recession lingers, many financially strapped states finally gave up on building more of their own facilities, which is where CAA and Wall Street prison profiteers come in, ceasing on yet another crisis, these companies use minorities to support bottom-line capitalism in its most barbaric and callous form. CCA demands that states agree to a 90 percent occupancy rate at all times, and includes a housing system as shown above with minority inmates being the majority of those jailed. Photo Credit: montanacorruption.org

Recently, top company officials offered to buy additional prisons in as many as 48 states, including one of the more heartless stipulations being that they guaranteed at least a 90 percent occupancy rate. Armed with a $250 million war chest, CAA executives also demanded 20-year management contracts from negotiating state officials.

Just who the overriding majority of all those most unappreciative tenants will be is as predictable as the findings of a Progressive Labor Party study, which found that “the private contracting of prisoners for work fosters incentives to lock people up. The system feeds itself,” researchers concluded.

“If private companies are allowed to own the deeds to prisons, they are a big step closer to owning the people inside them,” reads a statement by the Left Business Observer. It also points out that working for pennies a day, federal prisoners, among others, already produce 100 percent of all military helmets, ammunition belts, bullet-proof vests, ID tags, and canteens.

Some compare the system to a form of modern day indentured servitude and, indeed, the whole notion of prison labor has its roots in slavery. Following the Civil War, there was a system introduced and embraced for the “hiring out” of prisoners developed as a means of preserving the tradition of slavery.