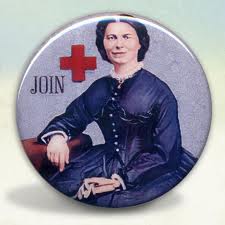 Celebrating Clara Barton during Women’s History month seems an appropriate time to re-examine the life of one of history’s most famous women and find out how close she came to not founding the American Red Cross.

Clara Barton was born on Christmas Day in 1821 in North Oxford, Massachusetts. She grew to be a painfully quiet and shy girl. To try and help overcome her shyness, Barton decided to become a teacher. When she was 17 years old, Barton received her teaching certification and began her career in North Oxford.

For more than a dozen years Barton remained a teacher in Massachusetts. Then, depressed at the lack of career opportunities in North Oxford, she went to visit her childhood friend Mary Norton in Hightstown, but fell even deeper into depression. “I have grown weary of life,” she wrote.

Then, Barton visited nearby Bordentown, New Jersey. There she saw groups of children just hanging about the streets. Their parents were too poor to pay for school. It was an epiphany moment for Barton. She decided to start a free school for boys and girls – likely the first free public school in the state. Of courseall the doom-and-gloom people warned her not to, and told her tales of the awful children that would attend. But she forged ahead. Six students showed up the first day. By the end of the week there were forty, and by the end of the year there were six hundred – a mixture of boys and girls. The school was an unqualified success. Bordentown officials embraced it, and decided to builds Barton a new school building. They did – and then put a male in charge of the school instead of Barton, who had to report to him.This was the moment of decision for Clara Barton. She could either meekly accept having a man receive all the credit for her hard work, or she could reject the idea. Barton wrestled long and hard with her decision, outraged that a man was getting the credit for her work but reluctant to leave her students. Finally, sadly, she left Bordentown in 1854.Barton left Bordentown without a clue of her future direction. She would go on to found the American Red Cross, but if she had made a different decision earlier in her life, who knows what might have happened?