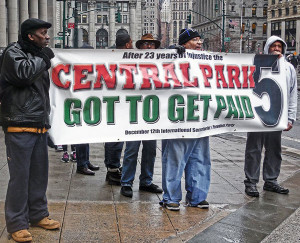 Hundreds of protestors convened in New York City’s Central Park this week in search of simple justice and seeking to lend greater illumination to what they yet see as some of the city’s darkest hours.

Some 24-years after the so-called “Central Park Jogger Case” garnered national headlines and polarized the city largely around racial divisions, supporters of the “Central Park Five” returned to the scene of the crime to voice support for what they term their continued victimization.

It’s been more than ten years now since the rape that led to the convictions of Kharey Wise, Yusef Salaam, Raymond Santana, Antron McCray, and Kevin Richardson were all vacated. Yet each of them stills finds himself embroiled in an ongoing dispute with city officials over what should now constitute restitution in a case where malicious prosecution, racial discrimination, and emotional distress are all at issue.

The quintet of black and Latino youths were mere teens when sentenced to prison terms ranging from 6 to 13 years. Outspoken businessman Donald Trump, took out full page adds in several papers demanding that the teens all be instantly executed.

On April 19, 1989, then 28-year-old jogger Trisha Meili, was attacked and raped while jogging through the city’s famed park. Nearly as soon as police heralded the arrests and boasted of having secured confessions, charges of intimidation, and coercion were running rampant.

Attorney Michael Tarif Warren, who represented at least two of the men since 2002, maintains investigators were also aware that DNA evidence gathered at the crime scene also served to exonerate each of the men.

In 2002, while serving a life sentence for murder and yet another rape, drifter Matias Reyes confessed to the crime. Later, clues at the crime scene confirmed his admissions. ‘The Central Park Five’ originally debuted in theaters on November 23, 2012, and it is based on the wrongful conviction of five young men on charges of rape, assault, and attempted murder in the Central Park Jogger case. Photo Credit: Sundance Selects

So this week, Wise, Salaam, Santana, McCray, and Richardson all gathered at the very spot where their lives forever changed, still seeking the justice they hoped to attain. “It justseems that this (Bloomberg) administration does not want to find resolution and settle the case as it goes through federal court,” State Comptroller John Liu told the Amsterdam News. “I believe that it is an irresponsible position and not in the best interest of New Yorkers, both from the viewpoint of what’s right and wrong, and a fiscal perspective.”

Earlier this year, the men’s cause gained yet another boost when famed filmmakers Ken and Sarah Burns released their documentary “The Central Park Five” to rave reviews, even comparing it to other miscarriages of justice such as the Scottsboro Boys rape case. The film began airing on PBS just last week. “These men and their families have been through enough,” said Liu. “It was a terrible chapter for them, the young woman, and this city.”