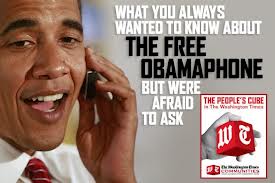 CPAC, Sarah Palin and free Obamaphones converge to continue to perpetuate the image of the conservative wing of the Republican Party as being extreme, loose with the truth, and out of touch with reality. The CPAC had many notable moments,ut one of the most ridiculous things that emerged from the conservative convention was Sarah Palin’s ill-informed remark about President Obama giving out “free Obamaphones and prophylactics.”

Now how does that work? Does the President stand on the front lawn of the White House and toss phones and condoms over the fence to the waiting crowds? Ms. Palin certainly makes it sound that way.

In reality, President Obama is not the person who deserves either the credit or the blame for the free cellphones or no-cost condoms being dispensed. We will leave the conversation about condoms for another day, and use this space to address the myths that abound regarding  free Obamaphones.

According to the Wall Street Journal http://online.wsj.com/article/SB10001424127887323511804578296001368122888.html?mod=WSJ_hp_LEFTWhatsNewsCollection  the free Obamaphone myth started with a hoax email in 2008. Government subsidy of phone service began in 1984 when the Lifeline program was put in place to assure that impoverished individuals weren’t cut off from jobs, families and emergency services because they couldn’t afford a telephone. But Sarah Palin during the CPAC wanted to keep the myth of free Obamaphones alive. At the onset of the program, it applied only to landline phones because that was the only standard phone service available. In 2008, the program expanded its assistance to aid with the cost of basic cellphone service. It was purely coincidental that Obama was elected president in the same year.The Lifeline Program is open to people who meet federal poverty guidelines or are on food stamps, Medicaid or other assistance programs, and only one Lifeline subscriber is allowed per household. Revenue to fund the program comes from a $2.50 fee added to the phone bill of every American who pays for landline or cellphone service. Lifeline then pays carriers $9.25 a customer per month toward free or discounted wireless service.

If there is a problem with the “ free Obamaphone” program it is not due to any generosity coming from the White House. But if left up to Sarah Palin and others at the CPAC, this is exactly what they would want you to believe. The program is currently being investigated because payouts under the program have shot up from $819 million in 2008 to $2.2 billion in 2012 as more wireless carriers have persuaded regulators to let them offer the service. For the carriers, the program is a chance for them to sign up more subscribers and make a small profit, plus more money if customers go over their small initial allotment and need to buy more minutes or text messages. Carriers can set prices for their Lifeline subscribers as the companies wish.Until last year, FCC rules didn’t require carriers to certify to the FCC that subscribers were eligible. Consumers could self-certify, and in many states documentation wasn’t required. The cost of the program is expected to return to near 2008 levels this year since those who are not eligible for the program have now been removed.

Once again, private enterprise has taken undue advantage of government dollars and the poor and the President are asked to take the blame. Do you think we will be hearing about that at from Sarah Palin or any attendees at the CPAC anytime soon? Will they stop the myth of free Obamaphones?