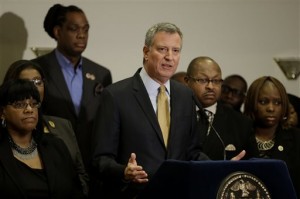 Mayor De Blasio speaks to fellow New Yorkers following the grand jury verdict not to indict the officer who put Eric Garner in a choke hold that killed him. De Blasio is a white man with a black son, a mayor elected on a campaign centered on mending relations between the nation’s largest police force and the communities of color who feel mistreated and, at times, endangered by the police.

As Bill de Blasio spoke Wednesday night, his voice halting, in the aftermath of a grand jury’s decision not to indict a white police officer in the chokehold death a black Staten Island man, he drew upon the experiences of his own family to connect with disheartened New Yorkers. He said he and his wife, Chirlane, have had to have painful conversations with their teenage son, Dante, about “how to take special care with any encounter he may have with police officers.”

“I’ve had to worry over the years, Chirlane has had to worry: Is Dante safe each night?” he said. “And not just from some of the painful realities of crime and violence in some of our neighborhoods but safe from the very people they want to have faith in as their protectors.” De Blasio and Eric Garner verdict present many lessons to be learned.

He recalled how President Barack Obama turned to him last week during a White House meeting following the violence that exploded in Missouri last month after a grand jury there did not indict a white officer in the shooting death of another black man, Michael Brown.

“And the President of the United States – he had met Dante a few months ago – said Dante reminded him of what he looked like as a teenager,” de Blasio said in a speech on Staten Island carried nationally on the cable news networks. “He said ‘I know you see this crisis through a very personal lens.’ I said to him I did.” That lens helped propel de Blasio to the position he now holds. A campaign commercial last year featuring Dante talking about his father’s vow to curb the use of stop-and-frisk, the policy that allows police to stop anyone deemed suspicious but which a federal judge ruled discriminated against blacks and Latinos, helped propel the little-known candidate to the top of the polls.

“He is uniquely situated to talk about this in such a personal way,” said Kenneth Sherrill, retired political science professor at Hunter College. “I thought his tone seemed appropriate and his message was very heartfelt.”

De Blasio urged calm, telling protesters that they would “not sully (Garner’s) name with violence of vandalism,” all the while making it clear he understood their frustration.

Indeed, much of de Blasio’s first year in office has been spent aiding the city’s black and Latino communities in achieving more fairness with the NYPD. They make up his political base and his poll numbers remain much higher with them than with white voters. Beyond cutting back stop and frisk, his administration instituted a new policy to stop making arrests for possession of small amounts of marijuana, sharply cutting the number of arrests that critics felt were disproportionately minorities.

He also ordered a retraining of NYPD officers and launching a police body camera pilot program. But those reforms – along with his close ties to fierce police critic the Rev. Al Sharpton – have drawn the ire of the police unions and badly strained relations with the rank-and-file NYPD.

And with the city simmering with tension after the Garner grand jury’s decision, de Blasio attempted to walk a fine line between the case’s two opposing sides, abstaining from directly criticizing the decision while also taking up the protestors’ rallying cry of “Black Lives Matter.”

“He did a very deft job of localizing his pain in the death of Eric Garner, leaving it to others to interpret what he thought of the police actions that day,” said David Birdsell, dean of the Baruch College School of Public Affairs. “It may have been the finest speech of his career. It doesn’t work if it’s just a political experience. It works if you have deeply powerful personal position.”