Denial of Racism Instead of Post-Racial Society 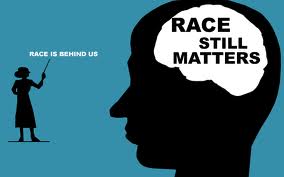 As much as we’d hope racism declined over time, claims of a “post-racial society” may be over-rated. And this denial of racism may be due to just being dumb about history.

Though we’ve seen progress with the first black president being re-elected, we’ve also seen a backlash as reflected in the Associated Press poll on racism released in October just before President Obama’s re-election, which stated, “51 percent of Americans now express explicit anti-black attitudes, compared with 48 percent in a similar 2008 survey. When measured by an implicit racial attitudes test, the number of Americans with anti-black sentiments jumped to 56 percent, up from 49 percent during the last presidential election.”

But being hopeful – and politically correct – we often see what we want and treat expressed perceptions of racism as exaggerated or even delusional. After all, current events suggest everything is wonderful in the Obama post-racial era. But new research suggests that differences in how people perceive racism may be as simple as a lack of some folks’ knowledge of history. In fact, the researchers from the University of Kansas and Texas A&M University cite lyrics from the late Bob Marley, who sang: “If you know your history/then you will know where you’re comin’ from/and you wouldn’t have to ask me/who the heck do I think I am.”

“Although popular and scientific understandings tend to portray ignorance as a lack of knowledge, this [research] emphasizes that ignorance itself is a form of knowledge that makes it possible to ignore or remain unaware of things that might otherwise be obvious,” say the researchers in their report, “The Marley Hypothesis: Denial of Racism Reflects Ignorance of History” published in Psychological Science.

The Marley hypothesis is defined as where “group differences in perception of racism reflect dominant-group denial of and ignorance about the extent of past racism.” It is a theory that could help clarify the relationship between perceptions of racism and ignorance as a safety mechanism that affords denial of – and justifies inaction about – social injustice. The researchers had 199 white students from a mid-western university and 74 African-American students from two historically Black universities judge whether statements about historical racism incidents were true or false. Some statements were well-documented incidents while others were fabricated. Needless to say, the black students were more accurate about historically documented racism while white students not only perceived less racism, but performed even worse with their historical knowledge of racism.Next, students were rated on their racial identity and their perceptions of racism. Those findings suggest self identity also influences perception of racism: Among those reporting a greater importance of racial identity, the black students perceived more racism while the white students perceived less.The researchers note that “people from historically oppressed racial and ethnic minority groups tend to report less satisfaction with race relations, see social inequality as a greater problem, and see more racism in incidents, such as legislation targeting undocumented immigrants and ‘stand your ground’ laws.”In other words, those folks within the majority group may be less likely to perceive racism because it actually challenges their personal view of the world.