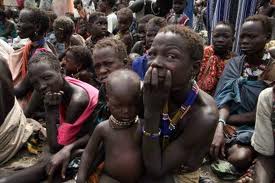 Ethnic killings in South Sudan have been a long-standing tragedy, but what is being done about it? The U.N. human rights investigators have confirmed that hundreds of civilians were killed because of their ethnicity after rebel forces seized a disputed town in South Sudan in April of this year. Not much was done then, nor is much being done now to stop it.

The U.N. Mission in South Sudan condemned what it called “the targeted killings of civilians based on their ethnic origins and nationality” in Bentiu, the capital of oil-producing Unity state.

It also condemned the use of Radio Bentiu FM by some individuals “associated with the opposition” to broadcast hate speech, even urging “men from one community to commit vengeful sexual violence against women from another community.”

Thousands of people have been killed in violence in South Sudan since last December, when presidential guards splintered and fought along ethnic lines. The violence later spread across the country as soldiers loyal to President Salva Kiir, an ethnic Dinka, tried to put down a rebellion led by Riek Machar, the former vice president and an ethnic Nuer.

“The situation in South Sudan is dire for civilians,” said U.N. spokesman Stephane Dujarric speaking to reporters at U.N. headquarters in New Yorkmonths ago.

According to human rights investigators from the U.N. mission, anti-government forces entered the Kali-Ballee Mosque in Bentiu this past April, separated civilians of certain nationalities and ethnic groups and escorted them to safety while the others were killed.

More than 200 civilians were reportedly killed and over 400 wounded at the mosque, Dujarric said.

At Bentiu Hospital several men, women and children from the Nuer ethnic group were killed for hiding and declining to join other Nuers who had come out to cheer the rebels as they seized the town, the U.N. mission said in a statement.

Individuals from other South Sudanese communities – as well as people from Darfur – were specifically targeted and killed at the hospital, the statement said.

At the Catholic church and the vacated U.N. World Food Program compound, rebels similarly asked people who had sought shelter to identify their ethnic group and nationality “and proceeded to target and kill several individuals,” Dujarric said. Toby Lanzer, the U.N.’s top humanitarian official in South Sudan, posted on Twitter that there were shocking scenes of atrocities, with “bodies of people executed” lying in the streets of Bentiu.

The U.N. has been warning of mounting evidence of ethnically-targeted killings in the world’s newest nation as both government troops and rebel forces lose and gain territories in sporadic clashes. Despite a ceasefire signed earlier this year, both sides continue to trade allegations over rights violations and civilian abuses.

The U.N. Mission called for the atrocities to be fully investigated and for the perpetrators and their commanders to be held accountable.

Dujarric said that in April, the U.N. mission extracted hundreds of civilians facing threats of violence from several places in Bentiu and Rubkona, another town in Unity State, where they had sought refuge.

“Over 500 civilians, including many wounded, were extracted from the Bentiu Hospital and other places, while thousands were escorted as they walked” to the U.N. mission base in Bentiu, which is currently protecting over 12,000 civilians, Dujarric said.

Machar has said he wants to see the exit of Kiir, whom he accuses of acting like a dictator. Kiir accuses Machar of launching a failed coup attempt in December 2013 that the government says sparked unrest across the country. Peace talks in neighboring Ethiopia have proceeded slowly.

What is being done to stop and prevent this protracted ethnic killing in South Sudan?