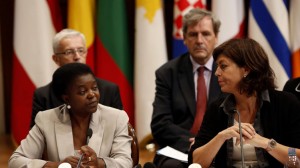 The ministers signed a declaration condemning racism as anathema to Europe’s democratic principles. They also called for the continent to embrace diversity and for its politicians to be models of unity, not intolerance. They said the attacks that Integration Minister Cecile Kyenge has been subjected to were unacceptable and must stop, particularly because they have come from Italy’s political class.

One member of Italy’s xenophobic Northern League has called the Congolese-born Kyenge a “Congolese monkey.” Another – the Senate vice president – likened her to an orangutan, and a third suggested on Facebook that she be raped so she would know what it feels like to be a victim of crime.

Kyenge, an eye doctor who has lived in Italy since 1983, has responded to the attacks with reserve, saying it’s not for her to denounce them but for Italians and their institutions. On Monday, ministers and ambassadors from 16 other European Union nations answered on her behalf and condemned the attacks against her. “Political leaders must be models of unity, acceptance of diversity and tolerance, and not actors of division and intolerance,” the declaration read.

Belgium’s deputy prime minister, Joelle Milquet, sponsored the initiative, after deciding the attacks against Kyenge couldn’t go unanswered. She said she was pleasantly surprised that so many countries quickly agreed to support Kyenge and sign the declaration, which also calls for a broader European pact against racism to be launched in January.

“Our reaction as politicians was: ‘If this is how we are talking between us in the political class, imagine what the rest of society is saying,'” said Malta’s minister for social dialogue, Helena Dalli. She said she and her colleagues felt the need to “erase the harm” done by xenophobic Italian politicians and the “bad example” they set for the rest of society.

Kyenge said the event marked an important moment for Italy and the rest of Europe because the attacks weren’t against just her but also against government institutions. Asked how she felt about the strong support, she said she was happy but also felt a great weight of responsibility.

“But I’m also certain that today’s gesture makes me understand that the weight is shared by all,” she said.