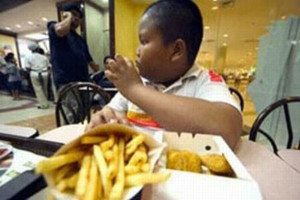 Does Fast Food Near Urban Schools Cause Obesity In Minority Children?

While many schools strive to introduce healthier meals in cafeterias, a new study indicates that fast food restaurants target locations near schools, it is more likely for black and Hispanic kids to be overweight. But does fast food near urban schools cause obesity in minority children?

The May 29 Baylor University study further indicates that those same overweight black and Hispanic kids are also less likely to benefit from exercise than Asian or white students.

“Our study demonstrates that fast food near schools is an environmental influence that has magnified effects on some minority children at lower-income urban schools,” said Dr. Brennan Davis, assistant professor of marketing at Baylor University, who co-authored the study with Dr. Sonya Grier, associate professor of marketing at American University.

The study, focused on the intra-urban differences in ethnicity and school income to the relationship of fast food locations to middle and high schools, and adolescent weight gains. When a fast food restaurant is a mile nearer to schools it almost entirely cancels the body weight benefits of exercising one day per week for students in general. But for black and Hispanic students in lower-income urban neighborhoods, a fast food restaurant a mile nearer to school canceled out the benefits of up to three days of exercise each week.

According to the researchers, they published in the current issue of Journal of Public Policy & Marketing because it “highlights the need to understand local targeted marketing strategies and outcomes according to income, ethnicity, and geographic segmentation. Many of the ethnic groups that are increasing in size and purchasing power, and are increasingly of interest to marketers, are also geographically concentrated.”

“We know that by age 2, black and Hispanic children have close to double the rate of obesity in comparison to white children in the U.S.,” says Dr. Elsie Taveras, chief of General Pediatrics at Mass General Hospital. “The behavioral risk factors during pregnancy, infancy, and early childhood explains most of these racial/ethnic differences.”

That study, published online in JAMA Pediatrics, indicates that early-life risk factors increase the prevalence of a higher body mass index and obesity among black and Hispanic 7-year-olds. These children and white children show almost double the incidence of obesity by age 7, which could largely be explained by such things as rapid infant weight gain, early introduction of solid foods, a lack of exclusive breast feeding, drinking sweetened beverages, and eating fast food frequently.

Both studies underscore the importance of understanding the relationship between marketing, and the response urban kids have to fast food targeting nearby their schools and community.