Hispanics Get Fewer Roles in Movies 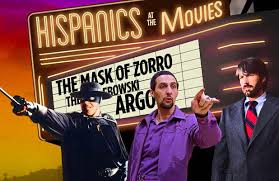 Hispanics Get Fewer Roles in Movies

Hispanics are getting fewer roles in movies, according to a new study. The study shows that less than 5 percent of actors in top Hollywood films are Hispanic, and that Latinas are more likely than women of any other ethnicity to appear partially or totally naked on screen.

The study of the top 100 grossing films in 2013, by the University of Southern California’s Annenberg school, found that the make-believe world of movies generally does not reflect what America looks like in real life. About 74 percent of the actors in the study were white, compared with a U.S. population that’s 63 percent non-Hispanic white.

Hispanics, who are 17 percent of the nation but had 4.9 percent of film roles, were the most underrepresented group on screen. That’s despite the fact that Hispanics bought about 25 percent of all movie tickets and are more likely than any other group to go to the movies, according to the Motion Picture Association of America.

Black characters represented about 14 percent of those in the films, which is comparable to America’s 13 percent black population. However, 17 percent of the films examined in the study did not have a single black speaking role, and half the films had a smaller percentage than the population, which indicates that a few movies with predominantly black casts balanced out the many movies with few black actors.

2013 was called a banner year for black actors, due to the success of films such as “Fruitvale Station,” ”Lee Daniels’ The Butler” and “12 Years a Slave,” which made Steve McQueen the first black winner of the best-director Oscar.

Hispanic stars such as the Dominican Zoe Saldana, the New York-born Puerto Rican Jennifer Lopez and the Spaniard Antonio Banderas appeared on the big screen. Yet there has been no significant change since 2007 in the number of non-white actors in top films, said Stacy L. Smith, director of USC Annenberg’s Media, Diversity & Social Change Initiative and author of the study being released Monday. “The only obstacle here is imagination,” Smith said in an interview.

She said that the number of black directors remained low – 6 percent of all directors in the study – and they were much more likely to use diverse casts. Hispanic directors were not counted.

Almost 38 percent of Latina actresses appeared partially or fully naked on screen, the study said. That compared with 32 percent of white females, 24 percent of black females and 18 percent of Asian actresses.

“Latinas have this stereotype that we’re sex symbols … that we walk sexy and (have) this flavor,” said Roselyn Sanchez, a Puerto Rican actress who has appeared in such films as “Act of Valor” and “Rush Hour 2.” She had no explanation for why Hispanics have so few movie roles. “It’s not about talent,” she said.

Black males were more likely than those from any other group to be shown in a committed relationship, at 68 percent. Asian males were the least likely, at 29 percent.

Blanca Valdez, who runs a Hispanic casting agency in Los Angeles, said it’s difficult for Latinos to audition for roles unless the call specifically asks for “diversity” or “multiethnic.” That often keeps them out secondary roles such as the neighbor, the lawyer, or the bank teller.

She said some actors with Hispanic surnames who look white will only put their first name on their casting photographs, just to get a foot in the door.

But Valdez said things have been changing rapidly in commercials and television, with more calls than ever for Hispanic and “multiethnic” actors. She hopes that studios will “follow the money” since Latinos are such big movie fans.

“I hope this improvement continues,” Valdez said, “because there’s so much talent out there that doesn’t get seen.”