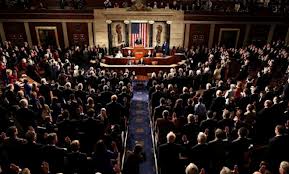 A new United States Congress has been sworn in — the 113th — to represent us, we the people. But so did the last Congress and all that have gone before. So why are we not holding Congress accountable to make decisions that are in our best interest?

The billion dollar question: Will we hold the new Congress accountable?

Every two years, we have the opportunity to select someone to go to Washington to make sure that the issues that affect the quality of life in our city, community, and household are taken into consideration when policy decisions are made and dollars are spent. But we repeatedly fail to hold the Congress we elected accountable.

After casting your vote, what have you done or what will you do to ensure that your Congressional representative is looking out for you and not his or her largest contributor?

The outcome of this last election should be evidence that money is not all powerful. The people’s vote was the power that ruled the day with the outcome of the U.S. Presidential election, as well as many contested elections in the U.S. Senate and House of Representatives despite the unprecedented amount of money spent.

The outcomes should trump the growing cynicism about whether our political process works.

But the elections outcome was just the beginning. Our real work as citizens has just begun. We must be actively engaged in holding Congress accountable.

If you have any doubt, just review the lack of performance of the last United States Congress. On last Friday, it faded into the annals of history as one of the worst, most ineffective, “Peoples House” since the founding of the Republic. We failed abysmally in holding Congress accountable.

But really, who is to blame? We, the people. The United State Congress represents us. We elected them and left them to bask in their personal and partisan bickering, while we the people, endured high unemployment, looked inept as a nation, and lost enviable credibility on the world stage. No doubt, divisiveness and partisan bickering have plagued Congresses of ages past, but the country found a way forward.

But during the last two years, we sat back and watched as America aired its dirty underwear.

There was a perpetual parade of disrespect of the Office of President — unprecedented in American history. But then so is Barack Obama as the first African-American President.

Getting the nation’s fiscal house in order took a second seat to the ardent and strident efforts to maintain irrational and antiquated political philosophies, while the nation’s and to a great extent the world’s economic health continued to decline.

To secure the availability of healthcare services for most Americans took an act of the Supreme Court, which was dubious at best. But a dubious act turns out to be better than a negative one.

The only way to avoid a repeat of the performance of the last United States Congress is to hold the new Congress accountable.

Will we? Or, will it be business as usual, while all we do is sit around and complain?

If we fail at holding Congress accountable and we get another two years like the last two, we have only ourselves to blame.

We might as well become a large cheering squad on the sidelines, because with our inaction we are essentially saying: You, go Congress!

Janice S. Ellis, Ph.D., is the Founder and Executive Editor of RaceReport.com and USAonRace.com. She writes frequently for both publicaitions and has an online commentary Cause and Civility