Violence Against Women Act (VAWA) Not Include Native Americans? 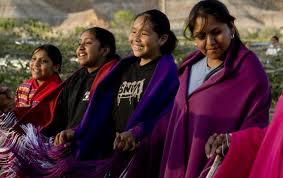 The Violence Against Women Act (VAWA), which has been reauthorized consistently for 18 years with little fanfare, has fallen victim to Congressional gridlock since it expired in Sept. 2011. First, it was held up before the election over provisions to include new protections for three particularly vulnerable groups of women: undocumented immigrants, LGBTs, and Native Americans. The Republican House of Representatives Majority Leader Eric Cantor (R-VA) is particularly against a provision that restores tribal authority to prosecute domestic violence against Native women by non-Native American men on tribal lands.

“American Indians are 2.5 times more likely to experience sexual assault crimes compared to all other races, and one in three Indian women reports having been raped during her lifetime,” according to Department of Justice figures. Roughly 56 percent of Native women have non-Indian husbands and DOJ indicates that 3 out of 5 Native women had been assaulted by their intimate partners and the homicide rate of Native women is more than 10 times the national average.

Of the Native women who are raped, 86 percent of them are raped by non-Native men, according to an Amnesty International report.

It is such tribal statistics that President Barack Obama has called “an affront to our shared humanity,” and why the Senate added the new protections in a bipartisan bill that passed in April. In effect, the Senate version would end the ability of non-Native men to evade justice. But the Republican House leadership has not put the new Senate version to a vote, passing their own bill in May that omitted the new provisions. In the wake of an election where the GOP fell horribly short of appealing to women and minorities, many are wondering why they are so opposed to the Justice Department-backed provisions protecting Native women. In fact, other Republicans led by Reps. Darrell Issa (R-CA), John Kline (R-MN), Mike Simpson (R-ID), Tom Cole (R-OK), and Patrick McHenry (R-NC) are at odds with GOP leaders and introduced a bill with the same jurisdictional changes as the Senate bill, but compromises by allowing defendants to move their case to a federal court if he feels threatened. Although advocates for Native women prefer the Senate bill, they’ll settle for the compromise to improve the justice system on reservations.

On August 10, 2012, President Obama issued an Executive Order on Preventing and Responding to Violence Against Women and Girls Globally. It would be ironic if Native women in this country are excluded from the same consideration.