Is Sunday the Most Racially-Segregated Day in America? 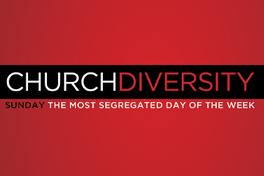 Sunday, whether intentional or non-intentional, is arguably the most racially-segregated day of the week in America. Whether you attend worship services in a church located in the urban core, a suburban area, or in the valleys and hillsides along winding country roads, it is very likely that the parishioner beside you or across the isle is of the same race if not the same ethnic group.

Many of us gather in the pews Sunday after Sunday, unbothered and unfettered by the racial homogeneity all around us, even when the edifice and its distinct steeple peers from a neighborhood whose residents may or may not be homogeneous at all. A neighborhood made up of a variety of racial and ethnic groups, members of which have never dared to dawn the church’s entrance, or never invited to come in.

At first glance, the “Sunday Self-Segregation” phenomenon is easily understandable. After all, our religious beliefs and methods of worship are extensions of our family life, whether Catholic or Protestant, Islamic or Judaic, or some other religion. So it comes naturally to gather with “our kind.” To do otherwise present a kind of, what we instinctively feel is an unwanted and unnecessary dissonance when we find ourselves outside of “our comfort zone.”

Such dissonance is often palpable for the visitor who goes to a church predominantly of a different race, as well as those he or she visits. So, what does that say about our willingness to invite, accept, include others — a brotherly deed that the very religion we embrace teaches and urges us to practice — who on the surface may look and live very unlike us?

Though we may see more diverse congregations in some areas, and certainly on some televised religious services, integrated congregations are far from being the norm.

But in some areas, there is no progress at all when it comes to welcoming different races to share in the worship experience.

This year alone there were two highly publicized incidents where two churches, one in Kentucky and the other in Mississippi, refused to marry a mixed couple and a black couple respectively. s. The church in Pike County Kentucky actually crafted and voted on a resolution excluding black people from church functions. The church decided to adopt this measure when one of its life-long members, a 24-year-old-graduate student brought her black fiancé to Sunday service to introduce him.

How many more churches are there, white or black, or of some other racial origin, that feel just as strongly, but have not been confronted with having to openly state their position?

There are likely many more churches, all over the land, that wish to, and work to remain racially segregated, whether white, black, brown, yellow, or otherwise. Perhaps, even more than we care to fathom.Do you think we can have true racial integration if we persist in remaining segregated in the worship experience on Sundays, even when we share the same religious beliefs that teach otherwise?

It certainly begs the question.

Janice S. Ellis is founder of RaceReport.com. You can follow her commentary at