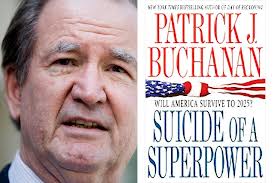 As leaders of the Republican Party continues to assess what should be its future, one must continue to ask whether the Republican Party of today has a race problem.When you look at the voices and actions of many of its leaders–from Congressional leader Eric Cantor to many Republican leaders in both houses of Congress, it begs the question. Then there are other media moguls like Rush Limbaugh, Patrick Buchanan and others that promote racist and divisive positions and philosophies.

Has the current Republican Party lost its way and forgotten its pre and post-Civil War history, and become inherently racist? It certainly is a question that warrants close examination.

In Partick Buchanan’s recent book, Suicide Of A Superpower,  he postulates that the growing minority populations and the corresponding cultural influence will be America’s undoing.

It doesn’t stop with the voices and leaders at the national level, but many Republican leaders at the state level are echoing the same racial discord.  Below is a link to an article which asks are Michigan Republicans racist? The same can be asked of Republicans in Arizona, Indiana, Mississippi, Alabama and a host of other states.  http://www.michiganradio.org/post/commentary-racism-and-republican-party

Janice S. Ellis is the Founder and Executive Editor of USAonRace.com and RaceReport.com. You can follow her writing at Cause and Civility