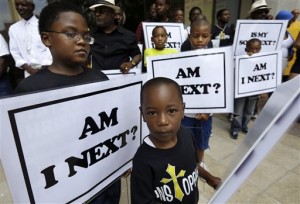 The killing of Michael Brown represents a larger problem than just another unarmed black teen having his life taken by Police or some other authority figure. There have been several such killings, at least four in recent months. So why the vocal and violent reaction in Ferguson, Missouri? Because the killing of Michael Brown represents larger problem for communities across America where there is entrenched racism and stereotypes influencing actions every day.

There was little violence after the acquittal of Trayvon Martin’s killer last July. Peace prevailed when at least four other unarmed black males were killed by police in recent months, from New York to Los Angeles.

Then Michael Brown was gunned down in Ferguson, Missouri. And waves of rioting have convulsed the St. Louis suburb for more than 10 days. Why Ferguson? Because the killing of Michael Brown represents a larger problem.

“People are tired of it,” said Kevin Powell, president of the BK Nation advocacy group, who organized peaceful protests after the Florida neighborhood watchman George Zimmerman was found innocent in Martin’s killing.

Powell is headed to Ferguson as an organizer and peace activist after the killing of Brown, the unarmed black 18-year-old who was shot by white police officer Darren Wilson. Battles have raged in Ferguson almost nightly, with stores looted, police firing tear gas and rubber bullets, people tossing Molotov cocktails, and dozens of arrests.

When police first confronted protesters with armored military vehicles, assault weapons and dogs, it reminded Powell of images from the 1960s civil rights movement.” Just a reckless disregard for the safety of the community they’re supposed to be protecting,” he said. “They just don’t care. It feels like they don’t care at all. Zimmerman was one person. This is an entire police force. It feels like the whole system doesn’t care.” On July 17, Eric Garner was killed by a chokehold after an arrest for illegally selling loose cigarettes in New York City.

On Aug. 5, John Crawford III was killed while handling a toy gun in a Wal-Mart outside Dayton, Ohio.

The circumstances of each case are different, of course, and investigations continue. But it show that the killing of Michael Brown represents a larger problem.

Brown was killed Aug. 9. The riots erupted Aug. 10, when more than two dozen businesses were damaged and looted. Some of the rioters, according to media reports, are hardened, violent young men who speak of seeking “justice,” which is often confused with revenge. Some are coming to Ferguson from out of town, whether to show solidarity or fight the crackdown, or possibly drawn to the media spectacle. Police have reported arrests of people from New York and California.

“It feels like a turning point,” said Blair L.M. Kelley, a history professor at North Carolina State University. “I think because so many black men die at the hands of the state.”

Kelley and Powell both said that the nature of Brown’s killing fueled anger: He was shot at least six times in broad daylight, in the middle of the street, in his own housing complex. Then his body lay in the street for hours, uncovered, in a pool of blood, before being taken away.”There were more than 100 people there looking at his body,” Kelley said.

She mentioned the killings of Jonathan Ferrell, an unarmed black man who was shot by a white officer after crashing his car in Charlotte, North Carolina, last September, and the black woman, Renisha McBride, who crashed her car in Detroit, went to a nearby house, and was shot dead through the front door.

“Those happened at nighttime, away from the public gaze,” Kelley said. “To leave Brown in the street like that, it was a disregard they could feel and taste and see.”

The last riots over an unarmed black death were in 2009, when Oscar Grant was killed by a white officer while lying face down on a train platform in Oakland, California. Hundreds of businesses were damaged, cars were overturned and smashed, and more than 100 people were arrested.

Similar circumstances led to unrest in Cincinnati in 2001 and in St. Petersburg, Florida, in 1996. One of America’s worst race riots ever was in 1992 in Los Angeles, after the acquittal of four white officers who beat the black motorist Rodney King. And people in many cities rioted against racial oppression during the turmoil of the 1960s.

“Riots erupt when all other options have been closed,” said Cathy Schneider, an American University professor who studies race riots. “When people really feel vulnerable in the face of police violence and local authorities are totally impervious to community demands.”

But the killing of Michael Brown represents a larger problem. Ferguson is 67 percent black; the mayor, city council, school board and police force are almost all white.

Schneider said that the riots of the 1960s gave rise to individuals and groups who could effectively negotiate tensions with police. That infrastructure may not exist in Ferguson, where the population has rapidly changed due to white flight, she said. Local officials promised Tuesday to make changes and be more receptive to community concerns.

Powell sees Michael Brown as a bookend of sorts to Trayvon Martin.

“Many of us who were involved in Trayvon thought we could get through this summer without another incident,” he said. “Sad to say, this relit another fire.”