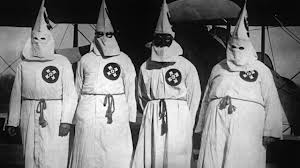 The Ku Klux Klan, KKK as it is most commonly known, has stepped up their recruitment drives in cities and hamlets all across the country, the most recent to gain attention is one that is occurring in Covington, Georgia, a suburb of Atlanta. Could the reelection of President Obama be the cause of this most recent activity?

Authorities in the Atlanta area are investigating whether any laws have been broken with the distribution of fliers inviting residents to join the KKK. The fliers were placed outside home, inserted in plastic bags and tossed at the end of driveways.

It is reported that the fliers include a drawing of a hooded Klansman standing in front of a tree with the heading that says, “Join the KKK – Loyal White Knights.” Authorities are reviewing the fliers to determine if they contain any inappropriate information or threats.

But this is just one in many incidents that reflects increased activity by the notorious, white supremacist group. Recruitment drives have occurred and continue to occur from Connecticut to California, Idaho to Texas, Washington to Florida and many points in between.

But the KKK, like many vigilante and white supremacist groups, has become more active since President Obama was first elected. Their activity continues to be incited by the extreme right-wing rhetoric and fear-mongering speech that saturates the airways and social media.

In case the extremists have not noticed: Slavery is dead. Racial equality continues to move forward, albeit all too slowly. The nation has elected, not once but twice, a black man to the highest most prestigious and powerful position in the land and the world. And America is becoming a nation of people of all shades and hues, with no immediate end in sight.

But the KKK, with its hate speech, threatening violence, and menacing ways is still hanging on to separatist dreams and the dying doctrine of white supremacy. It almost seems that all of the advancement in race relations during the last 50 years somehow did not occur in their world. Where have they been?

Still in the shadows, hiding behind their hoods, and hoping against hope that they can galvanize their clandestine brothers and sister to rally and rise once against, reclaim the mantle of fear and put black people and other people of color back in “their place” of disenfranchisement and oppression.

They clearly have not learned all these decades, through the wrongful deaths and destruction, that they have not stopped the march toward equality and human dignity. History may have been on their side, but not the future.

While we as a nation have a long way to go to achieve true equality for all, the election and re-election of Barack Obama clearly demonstrates that we are nation that can overcome and transcend some of the worst aspects of our history.

To the members of the Ku Klux Klan: Isn’t it time to give up the ghost of white supremacy, take off your ghostly robes, retire from the fight of segregation and join in with real Americans as we continue to work to make this a more perfect union?

Janice S. Ellis, Ph.D., is the Publisher and Executive Editor of RaceReport.com and USAonRace.com. She writes for both publications as well as her regular commentary, Cause and Civility