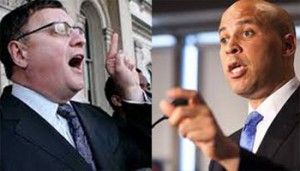 A tweet sent out by the campaign staff of New Jersey Republican candidate for U.S. Senator Steve Lonegan and directed at his likely opponent in this fall’s special election, African-American Democratic candidate Cory Booker, has been called racist.

The New Jersey senate sat became vacant earlier this year with the death of incumbent Democrat Frank Lautenberg. New Jersey Governor Chris Christie ordered a special election be held in October to fill the seat. There is currently a primary campaign underway in the state to choose two candidates for the election. Booker, the popular mayor of Newark, holds a commanding lead among Democrats heading into the August 13 primary. Lonegan holds a similar lead among Republicans.

During a recent debate among the Democratic hopefuls, Lonegan’s staff sent out a tweet that said: “Just leaked – Cory Booker’s foreign policy debate prep notes.” Below the wording was a map of Newark. It had West Africa, Portugal, Guyana, Afghanistan, Pakistan, Brazil, Bangladesh and Trinidad written over top of it, in apparent reference to the various neighborhoods of the ethnically diverse Newark. Newark is New Jersey’s largest city, and its population is more than 50% African-American.

Lonegan quickly ordered the tweet taken down, but it had already been seen by the website Politico, among others.

The tweet was labeled as “inappropriate…and fundamentally out of step with New Jersey values” said Booker’s campaign, while other candidates also attacked it.

For his part, Lonegan blamed the tweet on a young campaign worker, and said it had “no racist intent at all.” He then attacked those who said it was racist, claiming that liberal politicians will use the “race card” against conservatives like himself.

“This is all about political correctness, and America is sick of this,” he said. …they will use any excuse they can to pull the race card.” He also said that he wouldn’t fire the person who sent the tweet out, saying it was just a young kid making a mistake.

Lonegan has been embroiled in other controversies that have been called racist. He objected to a McDonald’s billboard that was in Spanish, and also proposed making English the official language of Bogota when he was mayor of that city.