Minority Vote Will Be Important in Swing States 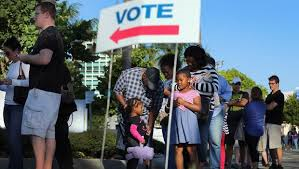 Minority Vote Will Be Important in Swing States

The minority vote will be important in swing states like Ohio and others, and a federal judge has issued a ruling in a lawsuit brought by civil rights groups and several black churches.  A federal judge on Thursday temporarily blocked an Ohio law that scales back early voting, ordering the state’s elections chief to set additional voting times just ahead of the fall election.

One is a directive from Republican Secretary of State Jon Husted that established uniform early voting times and restricted weekend and evening hours. Another is a GOP-backed law that eliminates golden week, when people could both register to vote and cast ballots. Without those days, early voting would typically start 28 or 29 days before Election Day instead of the prior 35-day window.

Voters in the swing state of Ohio can vote absentee by mail or in person.

The plaintiffs claimed the new rules would make it difficult for residents to vote and disproportionately affect low-income and black voters, who, the groups say, are more likely to use the weekend and evening hours to vote early in elections. They said low-income voters are more likely to rely on public transportation, making it difficult to get to a polling location on a lunch break. The black churches in the lawsuit have offered parishioners a ride to the polls after Sunday services to vote early.

The judge sided with the plaintiffs, who include the Ohio chapters of the American Civil Liberties Union and the NAACP, and said the measures were unconstitutional and in violation of the Voting Rights Act of 1965.

In granting the group’s request for a preliminary injunction, Economus characterized the measures’ burden on voting as “significant although not severe.”

The judge said that having decided to enact a broad early voting system, “Ohio and Secretary Husted may not capriciously change or implement that system in a manner that disproportionately burdens the right to vote of certain groups of voters.”

Under the judge’s order, early voting would begin Sept. 30 instead of Oct. 7. The ruling also directs Husted to require boards to set expanded evening hours and adds another Sunday to the state’s early voting schedule this fall. Husted’s office said it was reviewing the ruling.

The secretary of state has previously defended his directive as a bipartisan solution because the hours were proposed by Republican and Democratic county elections officials.

Freda Levenson, managing attorney for ACLU of Ohio, said the early voting opportunities are key to residents with inflexible work schedules or other responsibilities that prevent them from getting to a polling place during regular business hours. “This ruling means voters will not see their access to the ballot compromised during the upcoming election,” Levenson said.

The U.S. Justice Department had sided with the plaintiffs in the case, saying in a court filing in late July that the voting measures unfairly affect minority voters.

Economus set the next hearing in the lawsuit for Dec. 3.