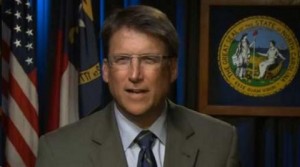 North Carolina defends new voting laws and vows to fight a lawsuit by the U.S. Justice Department. The lawsuit is challenging the state’s tough new elections law on the grounds it disproportionately excludes minority voters.

Gov. Pat McCrory said Monday he has hired a private lawyer to help defend the new law from what he suggested was a partisan attack by President Barack Obama’s Democratic administration. “I believe the federal government action is an overreach and without merit,” McCrory said at a brief media conference during which he took no questions. “I firmly believe we have done the right thing. I believe this is good law.”

U.S. Attorney General Eric Holder said in Washington on Monday his agency would show in court that the intent of the North Carolina law is to suppress voter turnout, especially among minority and low-income voters. “By restricting access and ease of voter participation, this new law would shrink, rather than expand, access” to voting, Holder said. “Allowing limits on voting rights that disproportionately exclude minority voters would be inconsistent with our ideals as a nation.”

The lawsuit, filed at U.S. District Court in Greensboro, is the latest effort by the Obama administration to counter a Supreme Court decision that struck down the most powerful part of the landmark Voting Rights Act of 1965. The 5-4 decision handed down earlier this year freed states, many of them in the South, from strict federal oversight of their elections.

Within days of the Supreme Court ruling, North Carolina’s legislature “took aggressive steps to curtail the voting rights of African Americans,” Holder told reporters, calling it “an intentional attempt to break a system that was working.”

State Senate President Pro Tempore Phil Berger and House Speaker Thom Tillis issued a statement that rejected Holder’s argument. “The Obama Justice Department’s baseless claims about North Carolina’s election reform law are nothing more than an obvious attempt to quash the will of the voters and hinder a hugely popular voter ID requirement,” they said. “The law was designed to improve consistency, clarity and uniformity at the polls and it brings North Carolina’s election system in line with a majority of other states,” the two lawmakers said.

“We are confident it protects the right of all voters, as required by the U.S. and North Carolina Constitutions.”
McCrory’s office said Monday he had retained lawyer Karl S. “Butch” Bowers, Jr., to defend the GOP-backed elections changes. Bowers, of Columbia, S.C., is a member of the Republican National Lawyers Association who served during the Justice Department’s special counsel for voting matters during the administration of President George W. Bush. In addition, the state’s Republican-run legislature has also hired outside legal counsel at taxpayers’ expense to defend the new law. Attorney General Roy Cooper, whose office typically takes the lead on defending the state in court, is a Democrat who may seek to challenge McCrory for governor in 2016 – as the new voter ID requirements are due to take full effect. A spokeswoman for Cooper said late Monday that the North Carolina attorney general’s office intends to represent the state in this litigation. “In our state the attorney general’s office has the primary duty to defend the state whenever it gets sued. That’s our duty, and that’s what we plan to do,” spokeswoman Noelle Talley said. She added that while the governor and legislators have hired outside counsel, “that’s not something we requested.”

Democrats and civil rights groups argue the tough new laws are intended to make voting more difficult for minorities and students, voting groups that lean toward Democrats, in states with legacies of poll taxes and literacy tests. North Carolina is among at least five Southern states adopting stricter voter ID and other election laws. The Justice Department on Aug. 22 sued Texas over the state’s voter ID law and is seeking to intervene in a lawsuit over redistricting laws in Texas that minority groups consider discriminatory. As in those other states, North Carolina Republicans have consistently said that voter ID requirements are needed to combat in-person voter fraud, which they claim is endemic despite any evidence of widespread voting irregularities.

Records show most criminal prosecutions for voter fraud in the state involve absentee ballots, which the new GOP-backed law actually makes easier to obtain and which do not require any sort of ID. State statistics show Republican voters are more likely to cast absentee ballots than Democrats. Holder specifically pointed to the lack of evidence showing voter fraud is a big problem in North Carolina as an indication the real goal is partisan gain.

“The Justice Department is not saying you can never have some requirement about identification. We certainly want to know that somebody who seeks to cast a ballot is in fact the person” who he claims to be, the attorney general said. The question, Holder said, is what kind of identification, what is the impact on the change in identification and what is the impact that it has on particular parts of the voting population.

The Justice Department lawsuit challenges North Carolina’s elimination of the first seven days of early voting and its elimination of same-day voter registration, which allows new voters to cast a ballot immediately after presenting election officials with proof of their name and home address. McCrory said North Carolina is simply joining the majority of states around the country that have passed what he termed common-sense regulations to protect the sanctity of the ballot box by deterring voter fraud.

The Southern governor said he had recently watched a video showing Obama presenting a photo ID at his polling place in Chicago. Illinois law requires voters to present a photo ID when casting an early ballot or when filing a new voter registration. “I believe if showing a voter ID is good enough and fair enough for our president in Illinois, then it’s good enough for the people of North Carolina,” McCrory said.
___
AP reporters Michael J. Mishak and Gary D. Robertson contributed to this report.
___
Follow Associated Press writer Michael Biesecker at Twitter.com/mbieseck