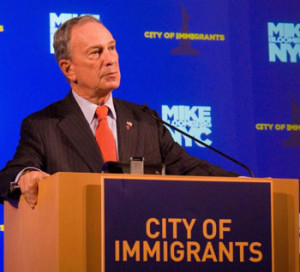 As Congress continues to debate an immigration reform bill, New York City prepares for it’s 10th annual Immigrant Heritage Week (April 17 through the 24) to celebrate the contributions of the city’s millions of immigrants over four centuries. But unlike the current immigration debate in Washington that is focusing only on the key future voting block of Latinos, NYC’s Immigrant Heritage Week is a citywide celebration that honors the real diversity of the Nation’s immigrant population.

According to the Mayor’s Office of Immigrant Affairs, the week-long event includes “a rich collection of cultural activities such as a special program of community-based interactive and informational presentations on Ellis and Liberty Islands from the National Park Services.” This includes the “American Dreamer Awards” to “honor individuals or organizations that have improved the lives of immigrants and their communities.” Established by Mayor Bloomberg in 2004, Immigrant Heritage Week is always celebrated around April 17th because it was on that day in 1907 when more immigrants entered the United States through Ellis Island than any other date in New York City’s history.

In fact, with four centuries of immigration, New York City has become a true international and racially diverse city. According to the Census Bureau, New York City is home to more than 8 million people, with only 44 percent white. As a city with whites being a minority and 36 percent of the population being foreign born, NY has become a model for what the rest of the U.S. may look like in the future.

Those demographic changes mean that we will probably be seeing more and more events like those in NYC celebrating this change in the country’s makeup.