NYPD Is Being Accused of Practicing Racial Profiling 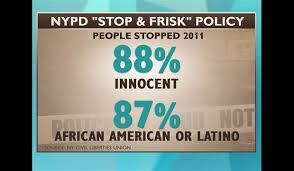 NYPD is being accused of racial profiling
Photo Credit: dnainfo.com

NYPD is being accused of practicing racial profiling with its stop-and-frisk policy that has been in place for the last several years. The policy is coming under close scrutiny by the Federal court and is  now confronted on three different fronts.

On Monday, March 18, a federal district judge began hearing a class-action challenge to NYPD’s stop-and-frisk  tactic which yielded more stops of young black males  in 2011 than their total black population in the city. While U.S. District Court Judge Shira Scheindlin is not asked to ban stop-and-frisk since it is deemed legal, lawyers for the Center for Constitutional Rights are asking her to order reforms and appoint a monitor to oversee those reforms. The lawyers argue that policy unfairly targets minorities, and NYPD is being accused of practicing racial profiling.

As of March 14, some 5 million stops  were made during the past decade, with more than 531,000 last year. According to a May 9, 2012, report from the New York Civil Liberties Union, 87 percent of those stopped in 2011 were black or Latino. Although, black and Latino males ages 14 and 24 account for only 4.7 percent of the city’s population, they represented 41.6 percent of the stops.  It is little wonder that the NYPD is being accused of practicing racial profiling.

The stop-and-frisk case opened up another legal can of worms by highlighting a further area where NYPD officers are overly aggressive: Low-level marijuana arrests. New York State decriminalized possession of small amounts of pot in 1977, as long as it’s not in “public view.” But once a person is asked to empty their pockets during a stop-and-frisk, NYPD considers even small amounts of marijuana to now be in “public view” and the person can be arrested.But it’s an expensive tactic: NYPD officers spent 1 million hours making 440,000 marijuana arrests between 2002 and 2012, costing the city $75 million in one year.

According to a new report from the Drug Policy Alliance, requested by NY State lawmakers who want to make possession of small amounts of marijuana only a civil infraction. The change, also supported by members of the state’s Black, Puerto Rican, Hispanic, and Asian Legislative Caucus, who gathered in Albany, on March 12, urged lawmakers to act on what they described as racially discriminatory marijuana arrest practices that use loopholes in the stop-and-frisk law to arrest young people of color for small amounts of pot.

New York Governor Andrew Cuomo pushed for the change in his 2013 State of the State Address and this week New York lawmakers are negotiating a state budget  that includes fixing the marijuana law as it pertains to NYC’s stop-and-frisk practice.Meanwhile, civil rights attorneys were in court on February 4 to ask a federal judge to order NYPD to halt further surveillance of Muslims without evidence of crimes, and request a court-appointed auditor to oversee police activities. According to a new March 2013 report, the threat of surveillance and police infiltration of college groups has caused many Muslims to fear participating in any activities, including community involvement, speaking in class, and posting messages on Facebook.

NYPD is being accused of practicing racial profiling. Observers feel that since the NYPD is the country’s largest police force, the outcomes of all these cases will no doubt trickle down to other departments nationwide.