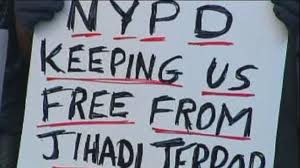 The lawsuit doesn’t prove its claims that the New York Police Department’s intelligence-gathering activities were unconstitutional, that they harmed the plaintiffs or that they focused on people based on religion, national origin or race, a city attorney wrote in a filing released Friday.

The plaintiffs, which include Muslim individuals and organizations, filed the lawsuit in June. It was the first lawsuit to directly challenge the NYPD’s surveillance programs that targeted entire Muslim neighborhoods, chronicling the daily life of where people ate, prayed and got their hair cut.

The surveillance was the subject of series of stories by The Associated Press that revealed the NYPD intelligence division infiltrated dozens of mosques and Muslim student groups and investigated hundreds of people.

The city’s lawyers argued that the NYPD’s information gathering was constitutionally protected, and they emphasized that a review of their activities by New Jersey’s attorney general found that no state laws had been violated.

“These allegations are more likely consistent with the NYPD’s efforts to understand post 9/ll where an Islamist radicalized to violence might try and conceal himself to fit in with his surroundings or attempt to recruit others to assist him,” according to the court filings. “A comprehensive understanding of the makeup of the community would help the NYPD figure out where to look in the event it received information that an Islamist terrorist may be secreting himself in New Jersey.”

The plaintiffs, who are being represented for free by the California-based civil-rights group Muslim Advocates, argue in the lawsuit that the NYPD program was “founded upon a false and constitutionally impermissible premise: that Muslim religious identity is a legitimate criterion for selection of law-enforcement surveillance targets,” according to the lawsuit.

The city’s request for dismissal repeatedly refers to the AP’s stories and documents it published. The city argued that if the plaintiffs suffered any adverse consequences from publicity about their names, businesses or places of worship, it was the AP’s act of publishing confidential materials that caused them harm.

“The disclosure of the documents about which they (the plaintiffs) complain was the sole result of The Associated Press publishing the documents along with a series of articles based upon their (the AP’s) own interpretation of the documents,” according to the motion to dismiss the lawsuit.