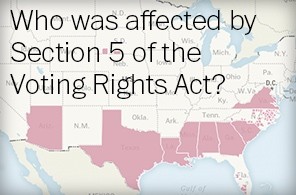 The Obama administration launches fight to protect minority voters, beginning with the state of Texas, and vowing that Texas is among the first of many states to be challenged.

The Justice Department opened an aggressive new front in the battle over voter protection Thursday, singling out Texas for legal action and promising broader efforts to come after last month’s Supreme Court ruling that wiped out a major provision of the Voting Rights Act. It was the administration’s first legal response to counter the justices’ 5-4 decision, but Attorney General Eric Holder pledged that “it will not be our last.”

In a speech to the National Urban League in Philadelphia, Holder called the Voting Rights Act “the cornerstone of modern civil rights law” and said that “we cannot allow the slow unraveling of the progress that so many, throughout history, have sacrificed so much to achieve.”

The Supreme Court, on June 25, threw out the most powerful part of the Voting Rights Act, whose enactment in 1965 marked a major turning point in black Americans’ struggle for equal rights and political power.

Holder said the first Justice Department move would be to ask a federal court in San Antonio to require advance approval for voting changes in Texas, a state riven with political battles, from redistricting to voter ID requirements. “Even as Congress considers updates to the Voting Rights Act in light of the court’s ruling, we plan, in the meantime, to fully utilize the law’s remaining sections to ensure that the voting rights of all American citizens are protected,” Holder said.

The Justice Department is asking that a preapproval requirement in Texas apply for 10 years and “beyond 10 years in the event of further discriminatory acts,” the department said in a court filing in San Antonio.

The separate provision of the Voting Rights Act that Holder is invoking may be a difficult tool for the Obama administration to use. A handful of jurisdictions have been subjected to advance approval of election changes through the Civil Rights Act provision it is relying on, but a court first must find that a state or local government engaged in intentional discrimination under the Constitution’s 14th or 15th amendments, or the jurisdiction has to admit to discrimination. Unlike in other parts of the voting law, the discriminatory effect of an action is not enough to trigger the so-called bail-in provision.

In the Texas case, the department is not directly intervening but is filing what’s known as a statement of interest in support of private groups that have filed suit. “The fact that intervention in Texas is the Department of Justice’s first action to protect voting rights” following the Supreme Court decision “speaks volumes about the seriousness of Texas’ actions,” said state Rep. Trey Martinez Fischer, a Democrat from San Antonio and chairman of the Mexican American Legislative Caucus, which is a plaintiff in the San Antonio case. North Carolina may become another target for the administration’s initiative. On Wednesday, the Republican-dominated North Carolina Senate gave preliminary approval to sweeping election law changes, including a requirement that voters present photo Identification at the polls and a shortening of early voting by a week.

In Texas, Holder said, there is a history of “pervasive voting-related discrimination against racial minorities.” Based on evidence of intentional racial discrimination presented last year in a redistricting case, “we believe that the state of Texas should be required to go through a preclearance process whenever it changes its voting laws and practices,” said Holder.

In its filing in San Antonio, the Justice Department said that “in every redistricting cycle since 1970, courts have similarly found that one or more of Texas’ statewide redistricting plans violated the voting guarantees of the Constitution or provisions of the Voting Rights Act.” A three-judge panel in San Antonio has been looking at Texas voting maps for state and congressional redistricting since 2011, when the court threw out boundaries drawn by a then-GOP supermajority in the statehouse.

An ensuing legal battle between the state and a coalition of minority rights groups upset the 2012 elections in Texas, delaying party primaries that ultimately used temporary maps drawn by the court.

Under the direction of GOP Gov. Rick Perry last month, the Legislature ratified those interim maps as permanent over the objection of Democrats, who still contend the maps are biased and under represent minorities. On Thursday, Perry called the Obama administration’s actions an “end-run around the Supreme Court.”

Last year, a federal court in Washington, D.C., found that Texas lawmakers had intentionally discriminated against minorities in drawing political maps and that the state’s voter ID law would disenfranchise minority voters. But the Supreme Court decision throwing out part of the Voting Rights Act removed the power of that court to stop those measures from going into effect. Minority groups asked the three-judge panel in San Antonio last month to adopt the findings of the District of Columbia court and require Texas to submit all proposed voting-law changes for prior court review. Holder’s announcement places the Justice Department on the San Antonio minority groups’ side.

Last month, the Supreme Court effectively gutted the part of the Voting Rights Act under which all or parts of 15 mainly Southern states had been required to submit all voting changes for approval from Washington before they could take effect. The decision, written by Chief Justice John Roberts, said it was no longer fair to subject those jurisdictions to strict federal monitoring based on data that was at least 40 years old. Such extraordinary intrusion on state power to conduct elections could be justified only by current conditions, Roberts said.

“There is no denying, however, that the conditions that originally justified these measures no longer characterize voting in the covered jurisdictions,” the chief justice said.