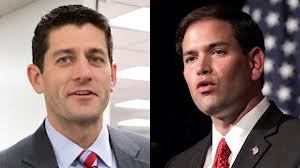 Paul Ryan and Marco Rubio, two potential 2016 presidential candidates, laid out policy prescriptions for their Republican Party on Tuesday night, nudging a party still smarting from Mitt Romney’s loss to President Barack Obama to reach out to a broader audience.

Ryan, the GOP’s vice presidential nominee in November’s election and chairman of the powerful House Budget Committee, told his audience that their party cannot write off large swaths of Americans — a subtle reminder of Mitt Romney’s remarks criticizing 47 percent of Americans who don’t pay income taxes. And Ryan made clear that he would be making poverty in America a central part of his political message as he weighs a presidential campaign of his own.

“You know, both parties tend to divide Americans into our voters and their voters. Let’s be really clear: Republicans must steer very clear of that trap. We must speak to the aspirations and the anxieties of every American,” Ryan said at a dinner to honor his former boss, Jack Kemp, who also was a failed GOP vice presidential nominee.

Rubio, too, said the party risked irrelevance if it only appealed to wealthy voters and made clear the party had to reach out to large segments of the electorate that Romney seemed to write off. Should Rubio run, his pitch and personal biography seem tailored to those voters.

“There are millions of Mario Rubios all across America today,” Rubio said of his father, a bartender whom he described as “poor and motherless with limited education.”

“They aren’t looking for a handout,” Rubio continued. “All they just want is a job that provides for their families. … It all starts with our people — in the kitchens of our hotels, in the landscaping crews that work in our neighborhoods, in the late night janitorial shifts that clean our offices. That’s where you will find the dreams America was built on, that’s where you will find the promise of tomorrow.”

The 2016 presidential race was an undercurrent to the evening. As he began his remarks, Ryan joked that he and Rubio soon would be sharing meals in states that lead off the nominating calendar.

Will Marco Rubio be a presidential candidate in 2016? – Photo Credit: pauldryan2016.blogspot.com

“Know any good diners in New Hampshire or Iowa?” Ryan asked the room to laughter before delivering a speech on ending poverty. “I’m sure the press won’t read too much into that one.”

Rubio, who already has made a trip to Iowa since Election Day, made a nod to another state that is early in the primary calendar.

“I will not stand by and watch the people of South Carolina ignored,” Rubio said to more laughter.

Ryan’s remarks on poverty closely resembled a speech he gave in Cleveland during the campaign’s final weeks. Ryan had hoped to use that speech to reset a flailing Romney-Ryan campaign, perhaps blunt the criticism of Romney’s “47 percent” remarks and make an appeal to struggling Americans a cornerstone of a final push.

Romney’s aides in Boston put a nix on that campaign strategy and Ryan returned to his standard speech the next day.

Ryan, now freed of Romney’s handlers, was reflective at times about his 12 weeks on the ticket and offered praise to his political partners Kemp and Romney during his 20-minute speech here.

“Now Jack and I share something else in common: We both used to be the next vice president of the United States,” Ryan said. “You know, although I wish this election had turned out differently, I’m proud of the campaign Mitt Romney and I ran.”

But, he acknowledged, “the election, it didn’t go our way, and the Republican Party can’t make excuses.”

He hinted the 2012 campaign was unlikely to be his last.

“Losing is part of politics, and can often prepare the way for the greatest victories,” Ryan said.

Rubio, too, seemed attuned to a 2016 campaign. His remarks borrowed heavily from lines he tested in Iowa just a week after November’s elections and suggested a message on poverty and education might be central to a 2016 campaign.

“The path to a prosperous and growing American middle class is the combination of a vibrant economy that creates these middle-class jobs and a people with the skills needed for these new jobs,” said Rubio, urged by some to make a White House run of his own in 2012. Rubio was often pushed as a potential Romney running mate.

“Not so long ago, even if you didn’t graduate from high school, if you were willing to work, you could find a job that paid enough for you to buy a home, start a family and eventually send your kids to college and a better life,” Rubio said. “Those days are long gone, and they are probably not coming back.”