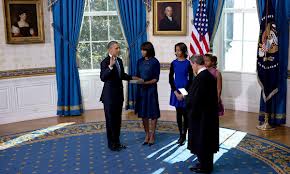 President Barack Obama has been officially sworn in to begin his historic second term. It is not just historic because he is an African-American who has been elected twice by a racially polarized country. It is historic for many other reasons.

President Obama is one of four presidents in the last century to have been re-elected for a second term with over 50 percent of the popular vote. He joins presidents Franklin Roosevelt, Dwight Eisenhower  and Ronald Reagan. What a feat, considering the partisan polarization, a struggling economy, and the vestiges of racism that still run deeply across America.

Yes, he made tough unpopular decisions to save an economy that was in free fall and averted what could have been the worst financial disaster in American history, that would have had long-term, perhaps lasting, effects across the global economy. Historians will be sure to note and make comparisons to the challenges Franklin Roosevelt faced before him during the great depression.

Despite entrenched Congressional opposition, perhaps the greatest historical achievement by this president has been the passage of the Affordable Health Care Act, that extends the availability of health care services to most Americans. Many presidents before him had tried and failed.

What do you think will be the greatest challenge President Obama will face during his second term? Will it be a Congress with a Republican contingent still committed to not approving or accepting any policy proposal he puts forth even when it contains many components similar to their own? Will it be a silent electorate that does not see the value of making is voice known about those issues so important to them, their children, and generations to follow?

What should be the President’s top three priorities? Clearly, at the very top is to implement a balanced approach (spending cuts, revenue increases and a sustainable path for continued growth and advancement).  But what about making the necessary adjustments and taking the necessary steps to make sure that the Affordable Health Act is implemented and is on a solid footing?  And, should immigration reform be the third  —  first establishing a path to citizenship for the millions of illegal immigrants already here, controlling our borders, and examining our overall immigration policy?

Let us know what you think?

Janice S. Ellis, Ph.D., is the founder and publisher of RaceReport.com and USAonRace.com and writes frequently for both publications.

Those are very key questions without simple answers.