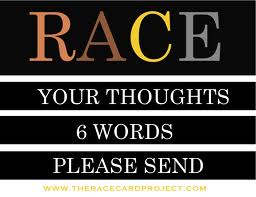 She asked for just six words.

Michele Norris, the National Public Radio host, was starting a book tour for her memoir, which explored racial secrets. Sensing a change in the atmosphere after the election of the first black president, and searching for a new way to engage and listen, Norris printed 200 postcards asking people to express their thoughts on race in six words. The first cards that trickled into her mailbox were from Norris’ friends and acquaintances. Then they started coming from strangers, from people who had not heard Norris speak, from other continents. The tour stopped; the cards did not:

“Chinese or American? Does it matter.”

“Waiting for race not to matter.”

Such declarations brought the Race Card Project to life.

“I thought I knew a lot about race,” says Norris, 51, an award-winning black journalist. “I realized how little I know through this project.”

Two years later, the cards have become almost a parallel career for Norris, best known for her work on NPR’s “All Things Considered.” She and an assistant have catalogued more than 12,000 submissions on http://www.theracecardproject.com . People now send them via Facebook and Twitter or type them directly into the website, leading to vibrant online discussions.

Many cannot resist accompanying their Race Cards with explanations, stories and personal experiences. Norris, in turn, feels compelled to contact them, listen to their stories, and archive this new conversation about race.

The discussion is inseparable from this moment, when the page of America’s racial history is in mid-turn. Part of Norris’ inspiration came from a series of NPR interviews on race during Barack Obama’s ascent. His reelection has reenergized Norris’ multiracial community of six-word poets:

“Never a Nazi, just a German.”

“Money on counter, not in hand.”

“You are dirt, so I scrubbed.”

Eric Liu, an author and educator, heard about the Race Card Project from a friend. He calls it “brilliantly powerful” due to the strict brevity: “It forces this profundity that you wouldn’t get if you let people go on for two hours.”

“It uses this format on the front end to unlock all of this expression and imagination,” Liu said, “and on the back end, once it’s out in the world, it forces people to see each other with new eyes.”

That’s what happened one Sunday when Celeste Brown, a graduate student from Florida, noticed the Race Card Project on Twitter and typed “We aren’t all ‘Strong Black Women'” into her computer.

A fire was lit. Women and men of all ethnicities gathered at keyboards from Los Angeles to Ireland. Comments flew: Isn’t Strong Black Woman a compliment? No, it’s strong like oxen – less than human. It doesn’t matter how we treat them because they will survive. Time to stop putting up walls and be vulnerable. I feel like I’m forced to be strong. It makes a woman sound like a weed, not a flower.

In an interview, Brown said that her statement unconsciously distilled ideas and experiences she had previously shared only with close friends, like the tension between being independent and needing a man, or the question of how black women can build careers without being stereotyped as too aggressive.

“I wrote the first thing that came to mind,” Brown said. For Norris, such exchanges fulfill her goal of making it easier for people to talk about race. As a professional interviewer, she often sees racial questions lead people into “the pretzel twist” – arms folded, legs crossed, shoulders hunched. But with the Race Card Project, people express things unlikely to be spoken into an NPR microphone:

“Marry white to dilute the black.”

“I married a black man anyway.”

“When did your family come here?”

Norris knows about reticence from her own family. In her memoir, “The Grace of Silence,” Norris describes a secret her doting father never told her: He was shot in 1946 by a white police officer in his native Birmingham, Ala.

Her mother hid something, too: Norris’ beloved grandmother traveled from town to town in the 1940s and ’50s dressed as Aunt Jemima to sell pancake mix, a custom that many now consider a degrading mammy stereotype.

By confronting her family’s secrets, Norris has inspired others to reveal their own.

Like the businessman in Los Angeles’ Koreatown who told Norris that he abhors Asian gangs, but secretly roots for them because they present an image of Asian manhood he doesn’t see anywhere else.

Or the elderly white woman who, along with her childhood friends, used to throw rocks at black sharecropper children walking by her home in Louisiana. She recalls the chill she got when one black girl was hit by a rock and turned to look her dead in the eye, a look that made her recognize her transgression. The woman asked her father what she should do. He told her, using the n-word, that she couldn’t hurt black people because “they have thicker skin.”

Or the story of Arlene Lee, who posted: “Birthday present; you are black, sorta?”

On the night before Lee’s 50th birthday, she was going through the papers of her late mother, an immigrant from Peru. Lee found her mother’s real birth certificate, plus a fake one she had used to enter the United States in 1958. On the fake document, Lee’s mother had changed her race from black to white.

“My mother raised me to be white and I am, at least by self identification I guess,” Lee wrote on the Race Card Project website.

“And now, I have a new prism through which to see things.”

So does Norris. “These six words are just the beginning of fascinating stories,” she says. “It’s the most interesting and rewarding work I’ve ever done as a journalist.”

Race Card submissions increased after the recent election. So did requests to use the project in schools or institutions, and more people than ever are including additional comments. Are you tired of people playing the race card? Join the conversation. Photo Credit: facebook.com

A book is begging to be written. Norris is talking with several institutions that are interested in permanently housing and maintaining the project. She will need assistance when she ends a leave from NPR that began last year, when her husband took a role with the Obama campaign.

So many threads lead to Obama. It’s clear, Norris says, that he opened the door for this conversation. But few people mention the president by name in their six words. He is mentioned far more in additional comments, and almost always in Norris’ follow-up interviews.

“It appears that his ascendance has made people think not just of his story and his place in history, but also their own,” she says.

And what about Norris’ own place? What are her six words?

When the project began, her words were personal, born of her experience as a black Minnesota girl with a slight speech impediment who was advised against pursuing a four-year college degree. “Fooled them all, not done yet” used to fit well.

But now, after what the nation has experienced these past few years, and the gratitude she feels toward thousands of people who shared their stories with her, Norris is reminded of a quote from the legendary dancer Alvin Ailey: “The dance comes from the people and must always be given back to the people.”

So today, her six words are:

“Still more work to be done.”

Jesse Washington covers race and ethnicity for The Associated Press. He is reachable at www.twitter.com/jessewashington or jwashington(at)ap.org.