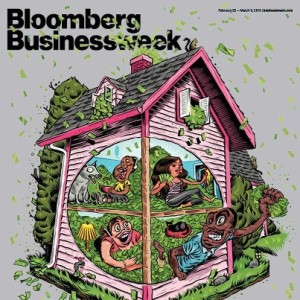 Racial discrimination plagues housing crisis in blatant and subtle ways. If you had any doubt, you only need to look at the cover of Bloomberg Businessweek to see how facts can be blatantly distorted and misrepresented.

But what is new when it comes to minorities and how they are often characterized?

A typical characteristic of racism is that it blames the victim for their victimization. The racism at play in the housing crisis is no exception. This week’s cover of Bloomberg Businessweek is clearly racist. It doesn’t flinch in its caricature depiction of Blacks and Latino’s profiting from the sub-prime lending practices that led to the meltdown of the housing market, as if the racial discrimination that plagues the housing crisis was not enough.

“The narrative of the crash on the right has been the blame-minority-borrowers line, sometimes via dog whistle, often via bullhorn,” but that’s not accurate, says Ryan Chittum at the Columbia Journalism Review. In fact, “minority borrowers were disproportionately victimized in the bubble,” pushed by predatory lenders into high-interest sub-prime loans even when they qualified for prime ones. A Princeton study http://www.housingwire.com/news/2010/10/04/princeton-study-institutional-racism-played-role-foreclosure-crisis details exactly how institutional racism played a significant role in the foreclosure crisis. “While policy makers understand that the housing crisis affected minorities much more than others, they are quick to attribute this outcome to the personal failures of those losing their homes — poor credit and weaker economic position,” noted Douglas Massey, the study’s co-author. “In fact, something more profound was taking place; institutional racism played a big part in this crisis.”Massey contends that minority-dominant neighborhoods continue to be under served by mainstream financial institutions, while predatory lenders are commonplace in such neighborhoods.

Thus, segregation once again plays a role in discriminatory practices.According to ThinkProgressEconomy.com http://thinkprogress.org/economy/2011/11/18/372517/latinos-african-americans-housing-crisis/ African-American and Latino borrowers are almost twice as likely to have been impacted by the crisis. Approximately one quarter of all Latino and African-American borrowers have lost their homes to foreclosure or are seriously delinquent, compared to just under 12 percent for white borrowers. The data support that rampant racial discrimination plagues housing crisis.

ThinkProgress first reported on this disparity in 2009, when bailed-out banks were found to have pushed many minorities who qualified for prime loans into higher-priced subprime loans, which can add more than $100,000 in interest payments over the life of a loan. In fact, 30.9 percent of Latinos and a whopping 41.5 percent of blacks were given higher-priced loans by large banks, compared to just 17.8 percent of white borrowers.

And so it goes, the victim is targeted, the con is perpetrated, the victim is blamed and their reputation tarnished, and on top of it all, they lose their home.

Racial discrimination plagues the housing crisis. So, how could Bloomberg Businessweek be so comfortable blatantly misrepresenting minorities, in caricature no less, in the housing debacle when they were most victimized?

How did we let this happen in 21st century America, and what will prevent it from happening again?

Rita Rizzo is a frequent contributor to RaceReport.com