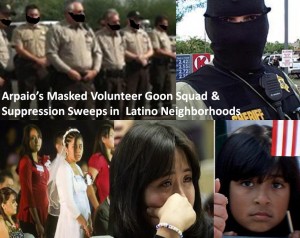 Racial profiling targets Hispanic drivers for deportation, and has not slowed in the West despite public attention or judicial rulings.

When a federal judge in Arizona ordered numerous concrete measures on October 2 to end Sheriff Joe Arpaio and his Maricopa County Sheriff’s Office from racial profiling and illegal detentions that target Latinos, it was considered the final victory in stopping Arpaio from violating the Arizona Constitution, the Fourth and Fourteenth Amendments of the U.S. Constitution, and Title VI of the Civil Rights Act of 1964. The judge ordered the appointment of a federal monitor, the creation of a community advisory board, video and audio recording of all vehicle stops, and data collection on how traffic stops are carried out.

But a week later, immigration activists and police officers clashed in Tucson on Tuesday October 8 after a traffic stop led to the arrest of two men on suspicion of being in the country illegally. Nearly 100 people formed an impromptu protest blocking Border Patrol and Tucson police, who responded with pepper-spray.

Activists brought the “Operation Streamline” fast-track immigration court to a standstill at Tucson’s federal on Friday, October 11, while other protesters stopped two buses traveling to the courthouse with around 70 people slated for immigration hearings by chaining themselves to the front wheels. Another protest took place in Phoenix on Columbus Day.

Now, Hispanic drivers in Montana feel like they “cannot drive anywhere in the state without getting harassed,” according to lawsuit by the Montana Immigrant Justice Alliance. The lawsuit, filed on October 7 in U.S. District Court, claims Montana Highway Patrol officers were pulling over the Hispanic drivers for routine traffic violations and improperly detaining them to check their immigration status. The lawsuit argues race was the sole basis of the detentions and asks the federal court to declare the policy unconstitutional and to stop the Highway patrol from further constitutional violations. Earlier this summer, former Montana Highway Patrol chief Kenton Hickethier was forced to resign amid complaints that alleged he told an officer to arrest people who might be in the country illegally. The lawsuit notes Hickethier had been disciplined for other complaints, but not for the wrongful detentions.

Meanwhile, Stop-and-Frisk doesn’t appear to be going away either.

Unfortunately, the Stop-and-Frisk practice seems to be expanding nationwide, according to the ACLU:

Former LAPD and NYPD commissioner William Bratton, who’s claimed that police departments that don’t use stop and frisk are “doomed,” has been hired as a consultant for the Oakland Police Department.

ACLU is currently litigating a proposed class action lawsuit in Salt Lake City against unlawful stops, searches and seizures of “students at risk” from being entered in to a “gang database,” which subjects them to future elevated police scrutiny and suspicion.

A September 2013 Vera Institute of Justice study examined the question of how being stopped by police, and the frequency of those stops, affect those who experience them at a young age – 13 and 25. The results revealed that with each time a person is stopped, “respondents are 8 percent less likely to report a future violent crime against them to the police,” and nearly 60 percent responded that they would not feel comfortable asking a police officer for help if they were in trouble.