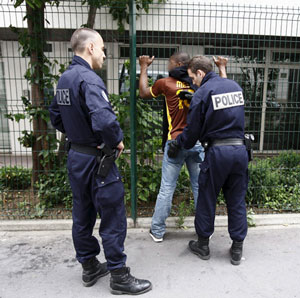 The decision upended an unusual bid to rein in law enforcement officers often accused of racial profiling. The verdict followed a one-day trial in July billed as the first of its kind in France, and a sign that long-silent minorities are increasingly finding their voice. Lawyers for the plaintiffs pledged to appeal.

Anti-racism groups say that non-white French – particularly blacks or those of Arab origin – face routine discrimination that diminishes their chances of finding jobs, getting into nightclubs and carving out a place for themselves in mainstream society. Such discrimination, they contend, also subjects minorities to humiliating public identity checks.

The plaintiffs – who range from students to delivery personnel – sought 10,000 euros ($13,000) each in the case. Their lawyers also wanted changes in the law that would require police to provide written reports of ID checks and spell out “objective grounds” for conducting the checks.

The court upheld the state’s argument that the ID checks aren’t illegal under French law. “The most obvious consequence(of the decision) is that police in this country… have the right to discriminate,” lawyer Slim Ben Achour said afterward. Lawyers for the plaintiffs said they were watching similar legal battles in New York and hoping that they weigh on French policy.

New York police have stopped, questioned and sometimes patted down about 5 million people over the past decade, mainly black and Hispanic men. The judge ruled that the policy violated civil rights and ordered a monitor to oversee changes to the policy including officer training, supervision and paperwork. In France, the law allows for widespread police checks on people deemed suspicious. Opponents say police have too much discretion. “Through this decision, French justice says that the law of equality … basically does not apply to French police and we are pretty shocked by that,” lawyer Felix de Belloy said.

A study conducted in Paris by France’s National Center for Scientific Research and the Open Society Justice Initiative, which backed the legal action, has shown that blacks have six times more chance of being checked by police than whites, and those of Arab origin have eight times more.

Discrimination against France’s minorities became a national issue after fiery riots in 2005 spread through suburban housing projects where many residents or their forebears come from former French colonies in Africa. The unrest laid bare the simmering anger by minorities isolated from mainstream life. What minority youth said was gratuitous stopping and frisking fed the rancor. Youth from housing projects and police have notoriously poor relations.

The French legal action was also backed by the Union of French Lawyers and the Stop Racial Profiling association.
___
Follow Elaine Ganley at http://twitter.com/Elaine_Ganley