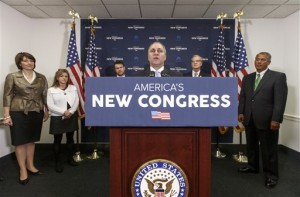 Republicans seem to be plagued by alleged racism in one form or the other among its leadership and the extremists within its ranks. The latest charge of bigotry involves Rep. Steve Scalise, the third-ranking Republican in the House. Scalise was forced once again, after the new Congress was sworn in, to declare that he  rejects all forms of bigotry after his admission last week that he addressed a white supremacist group in 2002.

Scalise, of Louisiana, faced fresh questions about his 2002 speech to a Louisiana convention of the European-American Unity and Rights Organization, which called itself EURO. Former Ku Klux Klan leader David Duke founded the group, which the Southern Poverty Law Center has classified as a hate group.

Republicans plagued by alleged racism is not new among some of the tea party and other party members who hold extreme views. Scalise has said that speaking to the group was a mistake he regretted.

“I reject bigotry of all forms,” Scalise said at a Capitol Hill news conference Wednesday. “And I think when you see the people that know me best, both here and especially back home, people I’ve served with, including people that I’ve been on opposite ends politically with, who know the truth and know what’s in my heart, they’re the ones who I think speak the best.”

Scalise’s comment was an apparent reference to remarks by Rep. Cedric Richmond, D-La., the only black member of the Louisiana congressional delegation. Richmond said last week he does not “think Steve Scalise has a racist bone in his body.”

Richmond said he has worked closely with Scalise and “I am not going to let them use Steve as a scapegoat to score political points when I know him and know his family.”

House Speaker John Boehner offered a similar defense of Scalise, who became the House majority whip last year. Speaking at a news conference of GOP leaders that included Scalise, Boehner said he thinks his colleague “made an error in judgment” by speaking to a group when he was “not clear who they actually were.”

“Now, I know this man,” Boehner said. “I work with him. I know what’s in his heart. He’s a decent, honest person who made a mistake. We’ve all made mistakes.”

Two civil rights leaders said Wednesday that Scalise’s participation in the 2002 event was troubling, especially given his role as a GOP leader whose responsibilities “include protecting the interests of all Americans.” The presidents of the Leadership Conference on Civil and Human Rights and the National Urban League said in a letter to Scalise that they were concerned that he would knowingly or unknowingly “legitimize the existence” of a group such as the European-American Unity and Rights Organization.

“To be candid…it seems implausible to us that, as a state representative with national aspirations at the time, you would not have heard about the Louisiana-based EURO, which was already a well-known hate group led by America’s most famous white supremacist, former Ku Klux Klan Grand Wizard David Duke,” wrote Wade Henderson, president of the Leadership Conference, and Marc Morial, president of the Urban League.

Morial and Henderson said they were concerned that Scalise’s actions “might indicate a genuine affinity” with positions taken by the white supremacist group or Duke himself. They cited Scalise’s vote against making Martin Luther King Jr. Day a state holiday in Louisiana and against naming a post office for Lionel Collins, a civil rights lawyer and the first African-American judge in Jefferson Parish, La.

Henderson and Morial requested a meeting with Scalise to “discuss ways to work together” for the good of all Americans, regardless of race or religion.

Scalise, 49, ascended to his leadership post in June in the chain of events that followed then-Majority Leader Eric Cantor’s surprise defeat in a Republican primary.

Scalise won the whip race with the solid backing of House conservatives, particularly Southerners who wanted a greater leadership voice considering the region’s role in giving Republicans their largest House majority in decades.