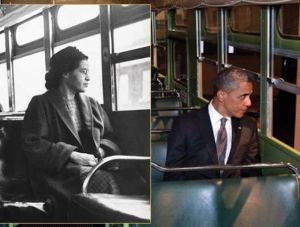 Rosa Parks statue unveiled as the Voting Rights Act is challenged before the Supreme Court creates an irony that cannot go unnoticed.

As we come to the close of yet another Black History month, these two different yet related events remind us of how slowly real and lasting change takes place when it comes to race relations in America. The fact that we still need a Black History month is evidentiary.

We are also reminded of how fragile and tenuous major changes can be.

In was in 1955 that Rosa Parks refused to give up her seat on a bus in the segregated south that led to the year-long bus boycott that catapulted a Civil Right movement that resulted in many historic changes including the Voting Rights Act of 1965.

President Obama, in his remarks at the unveiling of the Rosa Parks Statue, made it clear that it was her courageous commitment to justice and equality for all that help paved the way for a black man to become president of the United States.

But even during the unveiling of the Rosa Parks statue and the recounting of how far the country has come in trying to live up to its founding principles and creed, one fundamental tenet, the right to vote, is once again before the Supreme Court for protection. The irony of Rosa Parks’ statue being unveiled as a key provision of the Voting Rights Act is being challenged screams for reflection.

There are arguments being made to strike the very provision that protects the rights of blacks to freely exercise their vote in those states that fought so hard to deny and keep from granting that right in the first place. Those very states claim that they no longer need judicial oversight when it comes to not taking steps to make it more difficult for minorities to vote. People wait in line outside the Supreme Court in Washington, Wednesday, Feb. 27,2013, to listen to oral arguments in the Shelby County, Ala., v. Holder voting rights case. The justices are hearing arguments in a challenge to the part of the Voting Rights Act that forces places with a history of discrimination, mainly in the Deep South, to get approval before they make any change in the way elections are held. (AP Photo/Evan Vucci)

These arguments are being heard despite all of the effortsduring the 2012 Presidential election to make it more difficult for many minorities to cast their vote.

Yes, we have come a long way since 1955, when Rosa Parks stood her ground on being able to sit where there was an open seat on a public bus. But clearly we have a long way to go, when the basic right of a citizen being able to freely cast a vote is still at risk in certain parts of this country, especially for minorities.

While we celebrate the historic significance of Rosa Parks’ contributions to Civil Rights with the unveiling of a life-size statue in the Hall of Congress, we should be even more concerned that more than fifty years later we must take steps to continue to protect the Voting Rights Act.

As we come to the close of Black history month, both of these events in their own way remind us of how slowly real historical change comes about and how fragile its longevity can be.   The fact that we continue to need a Black history month rather than simply a study of a full and complete American history also speaks volumes.

Unveiling a statue commemorating Rosa Parks in the Halls of Congress and arguing before the Supreme Court for the need of the right to vote to be continually protected through extra judicial measures are reminders of the work that still need to be done for this country to live up to and live out the true meaning of its creed.

Janice S. Ellis, Ph.D. is the founder and publisher of RaceReport.com and is a regular contributor