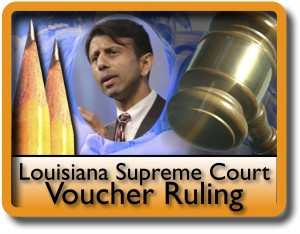 BATON ROUGE, La. (AP) – School voucher program is challenged in Louisiana and continues to be a major issue on how to protect equal access to quality education for minorities and the poor.

Gov. Bobby Jindal has asked President Barack Obama to check out Louisiana’s voucher program firsthand, saying the visit would make him scrap an administration lawsuit against the program.

Jindal sent a letter Monday to the White House inviting Obama and Attorney General Eric Holder to a private school that accepts voucher students, whose education is paid with state tax dollars.

“I am sure you would agree that it is critical to sit down with parents and students who are enrolled in the program to discuss their experiences at the new schools and how it compares to the experiences at their previous failing schools,” the Republican governor says in the letter, a copy of which was first obtained by The Associated Press. “I believe if you and the Attorney General are able to hear firsthand from parents about the experiences their children are having in the program, then you will reconsider the suit,” Jindal wrote.

The U.S. Justice Department filed a lawsuit in August seeking to bar Louisiana from awarding future school vouchers to students who otherwise would attend public schools under federal desegregation orders – until getting clearance from a federal court. Louisiana has 34 school districts under federal desegregation orders, and vouchers have been given to students in at least 22 of those districts, according to the Justice Department lawsuit.

The Obama administration argues that vouchers can impede desegregation efforts, skewing racial demographics of schools.
Jindal calls the lawsuit an attempt to force low-income, mostly minority children back into failing schools to appease teacher unions that oppose vouchers as siphoning money from public schools. “I think it is only right that you and Attorney General Holder join me and come visit a scholarship school in Louisiana to look into the faces of the parents and kids and try to explain to them why you want to force them back into failing schools,” the governor wrote to the president. The lawsuit has been an attention-grabbing case for Jindal, considered a possible 2016 presidential candidate. He has appeared on national TV talk shows, the Republican speech circuit and editorial pages of newspapers in several states to criticize the Justice Department effort.

The Justice Department claimed it had reached a “breakthrough” in the dispute, saying the state agreed to provide additional data on voucher students the department had sought. Jindal called that announcement a “PR stunt,” saying no resolution had been reached.

Taxpayer-financed tuition through Louisiana’s voucher program, called the Louisiana Scholarship Program, is available to students from low- to moderate-income families who otherwise would attend public schools graded C, D or F in the state’s performance rating system. About 8,000 students are attending private or parochial schools in the current school year through the voucher program, costing the state an estimated $45 million this budget year.

In his letter, Jindal describes the voucher program as part of a package of education reforms he’s worked to put in place to improve the quality of public schools. “However, it takes time to fix some of our failing public schools that have been in disrepair for far too long – time that our children do not have. Our children only grow up once and every single child, no matter race or income level, deserves an equal opportunity to get a great education,” he writes.