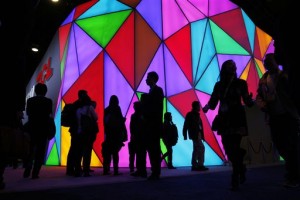 Intel CEO Brian Krzanich on Tuesday challenged the tech industry to increase the hiring of women and minorities, and he set a goal of full representation in his company’s workforce by 2020.

He said the company will hold its managers accountable by tying their pay to progress. The company also is investing $300 million to improve diversity, including initiatives to create a pipeline of women and minorities entering the technology field.

“This isn’t just good business,” he said. “It’s the right thing to do. When we all come together and commit, we can make the impossible possible.”

He said it was no longer enough to talk about valuing diversity and still “have our workplaces and our industry not reflect the full availability and talent pool of women and underrepresented minorities.”

According to a report on Intel’s website, women made up 24 percent of Intel’s workforce in 2013. Non-Asian minorities made up 14 percent.

The challenge comes as tech companies have begun releasing employment-diversity reports and women have faced harassment and threats in the video-gaming community. Krzanich cited both developments and said his company will regularly release progress reports on hiring.

Krzanich also used a keynote Tuesday to show off the company’s RealSense technology for seeing and understanding depth. With that, Intel showed the ability to use hand gestures to scroll a recipe on a tablet while cooking. Drones thought for themselves and maneuvered an obstacle course without human intervention. One man with visual problems showed how RealSense sensors on his clothing let him know what’s around him through vibrations.

It’s all part of Intel’s efforts to free machines from acting in just two dimensions, defined by the interaction between the screen and input device.