The State Of Blacks in America 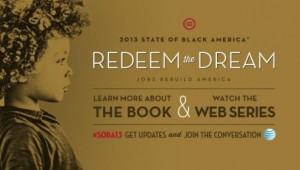 State Of Blacks in America

The state of blacks in America lags far behind whites when it comes to economic and social gains, according to the 2013 State of Black America Report released by the National Urban League.

As America’s first black President announced his proposed budget to the press on April 10, the National Urban League released its 2013 State of Black America Report with its take on the economic and social gains of African Americans.

“As the budget debate continues in Washington on whether to cut critical program funding, the 2013 State of Black America Report highlights a harsh reality: Budget-cutting fever will cause economic pneumonia,” Marc H. Morial, President and CEO of the National Urban League said in a statement. “If we are to move toward lasting economic recovery and full equality and empowerment, we must apply sustainable solutions — keenly focusing on jobs for all Americans and closing the gaps that result in a ‘tale of two Americas.'” The state of blacks in America continues to be in a downward spiral when it comes to jobs.

While this is a celebratory year as the 50th anniversary of the 1963 March on Washington – as well as the 150 years since the Emancipation Proclamation, the 37th edition of the “State of Black America, Redeem the Dream: Jobs Rebuild America” report concludes that despite social and economic gains, the African-American equality gap with whites has changed little.

“While African Americans experienced tremendous gains in educational attainment since the March on Washington for Jobs & Freedom and these gains increased their capacity to ascend the economic ladder, the distance between blacks and whites on this ladder hasn’t changed much over the last 50 years,” notes the report. In many ways, the state of blacks in America has declined since the sixties and seventies. The state of blacks in America when it comes to economic gains lags far behind whites.             Photo Credit: blackmediascoop.com

The state of blacks in America when it comes to economic and social gains lags far behind whites, according to the 2013 State of Black America Report released by the National Urban League.

The report credits the civil rights laws enacted for opening the doors of opportunity for blacks for the progress made in education and standard of living. In the analysis of the 2013 “Equality Index,” the National Urban League takes a closer look at current racial gaps in unemployment and income in relation to differences in education, economic status, and geographic location. The report notes that, “while the African-American condition has improved, including achievements in educational attainment and employment, this progress has occurred largely within the black community.”

According to the report, the double-digit gains in education, employment, and wealth within the black community contrast sharply with only single-digit gains made in those same areas compared to whites during the last 50 years. A few statistics provided include:

“This year’s State of Black America report underscores that employment remains the biggest barrier to equality in our country,” said Chanelle P. Hardy, SVP for Policy and Executive Director of the Urban League’s Policy Institute. “The National Urban League will continue to push for policies that support job growth now and for the next generation — such as the Urban Jobs Act and the Project Ready STEM Act.”

As in past years, this edition of the 2013 State of Black America report features essays from “esteemed” corporate, not-for-profit, government, academia, and media leaders who provide their own insight and analysis.”

But the lingering challenge is implement real measures that can be taken to improve the state of blacks in America.