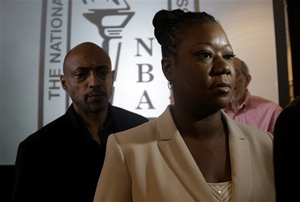 Trayvon Martin’s mother has joined the fight with prominent African-American lawyers organization in vowing keep the pressure on legislators to repeal or overhaul “stand your ground” self-defense laws.

Sybrina Fulton repeated her assertion that neighborhood watch volunteer George Zimmerman “got away with murder” in the 2012 killing of her son largely because of Florida’s self-defense law, which generally removed a person’s duty to retreat if possible in the face of danger. It was the first of its kind in the nation when passed in 2005. Now, about two dozen states have similar laws, but the focus of repeal efforts is squarely on Florida.

“We have to change the law so that this doesn’t happen to someone else’s child,” Fulton told reporters at the National Bar Association’s annual meeting. “My son wasn’t doing anything wrong. He was simply walking home. He wasn’t a suspect.”

Florida Gov. Rick Scott, a Republican, has rejected calls for a special legislative session on “stand your ground” from protesters who have been occupying part of the Capitol in Tallahassee since Zimmerman was acquitted earlier this month by a jury in Sanford. Zimmerman claimed self-defense in shooting the 17-year-old Martin during a fight; Martin’s supporters say Zimmerman profiled and followed him because Martin was black.

Senate President Don Gaetz, also a Republican, said Monday he agrees with Scott that there is no need for a special session. Gaetz said there is little agreement on whether change is needed to the “stand your ground” law and that voters have a chance in the 2014 elections to make their views known. Governor Rick Scott does not a believe a special session of the Florida legislature is necessary to debate a possible repeal of the controversial “Stand Your Ground” law. (pulse.ncpolicywatch.org)

Part of the message of Monday’s event was just that: urging people to register to vote and contribute to sympathetic politicians if they want such laws repealed. The organization’s president, John Page, also said the legal system needs to do more to ensure that racially balanced juries are chosen.

“We need to raise our voices together and say, ‘Enough,'” Page said. “This should be the first state where ‘stand your ground’ falls. And it will fall.”

Although he was not part of the event, the Rev. Jesse Jackson appeared as a spectator and later told reporters that the “stand your ground” law reminded him of past laws that prevented blacks from sitting at the front of buses. Such an ordinance sparked the bus boycott in Montgomery, Ala., in 1955 that was key to the civil rights movement — which did not focus just on the bus drivers, but on ending the law itself, he said.

Because Zimmerman’s trial was not focused on race, Jackson added, it “did not have a foundation based on reality. We’re not looking for a fight. We’re looking for a solution.”

The Justice Department is investigating whether Zimmerman, who identifies as Hispanic, may have committed a hate crime in killing Martin. Legal experts say it would be a difficult charge to bring because no evidence has surfaced indicating Zimmerman singled out Martin because he was black or that he harbored racial bias.