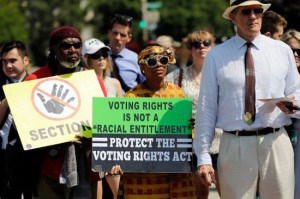 The U.S. Supreme Court struck down a key provision of the Voting Rights Act, one of the most important laws ever passed to defeat racial discrimination by allowing everyone the right to vote.

In a 5-4 ruling, the court ended a requirement that called for certain states and localities to get the federal government’s approval for proposed election law changes. That requirement mainly applied to states in the South, as well as certain counties in other states.

As part of the 1965 Voting Rights Act, this requirement protected the rights of African-Americans to vote despite the threats of violence and other means of intimidation by white America.

With the high court’s ruling, this requirement ends unless Congress comes up with a new formula that Chief Justice John Roberts said meets “certain conditions” in the U.S.

The court’s decision reflected a demographic shift in the country’s population, which anticipates whites as the new minority in coming decades in the U.S.

However, in a dissenting opinion, Justice Ruth Bader Ginsberg said the Voting Rights Act continues as a necessary means of protection against what she called subtler, “second-generation” barriers to voting. The NAACP’s field director speaks in front of the Supreme Court after it declared part of the Voting Rights Act unconstitutional. Photo Credit: Getty Images

Those fighting against racial discrimination and advocates for voting rights decried the court’s ruling, saying those laws safeguard the rights of minority voters in places with records of discrimination who now face a greater risk of disenfranchisement.

President Barack Obama, also critical of the court’s decision, said, “While today’s decision is a setback, it doesn’t represent the end of our efforts to end voting discrimination. I am calling on Congress to pass legislation to ensure every American has equal access to the polls.”

Besides African-Americans, the law’s requirement has also triggered past discrimination against American Indians, Asian-Americans, Alaska Natives, and Hispanics.

To read more about racial and ethnic issues visit our sister site at www.usaonrace.com