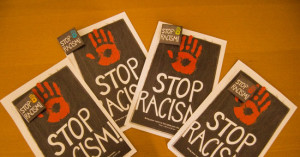 The Unitied Nations focus on racial discrimination in many ways. But special attention will be given to eliminating racism during the week of March 18-25. The United States should be front and center in these most important efforts to fight racial discrimination, but will we?

Several milestones of the civil rights movement in the United States are getting a lot of attention this year. Unfortunately, with the tendency of the mainstream press and most U.S. politicians to ignore the work the United Nations does, a week’s worth of worldwide attention on racial discrimination may go unnoticed and unattended by U.S. officials this month.

The United Nations focus on racial discrimination will be highlighted  with The annual United Nations International Day for the Elimination of Racial Discrimination scheduled for March 21, and with the International Day of Remembrance of the Victims of Slavery and the Transatlantic Slave Trade scheduled for March 25. Both events are part of a commemorative week of events  March 18-25. The United Nations focus on racial discrimination with The International Convention on the Elimination of Racial Discrimination (ICERD) which was  initially enforced on January 4, 1969, and is monitored by the Committee on the Elimination of Racial Discrimination. The ICERD is one of few human rights instruments of the United Nations (UN) that the US has both signed and ratified – but not in its entirety, choosing as recently as last year to pass on the section of the ICERD that urges governments to monitor and criminalize hate speech because of the US Government’s assertion that this section conflicts with First Amendment rights. The US has also chosen not to adopt an optional protocol that allows individuals to bring ICERD complaints against their home country to the UN.

The United Nations focus on racial discrimination with the World Conference against Racism and Racial Discrimination, Xenophobia and Related Intolerance, which first convened in South Africa in 2001, producing a comprehensive agenda known as the Durban Declaration and Programme of Action. But the U.S.delegation withdrew from the conference, prompting Human Rights Watch to state “its departure is a deep disappointment to the victims of racism who have placed their hopes in this meeting.” Then-Secretary of State Colin Powell said at the time that the U.S. delegation was leaving because the conference had criticized Israel. In April 2009, a follow-up conference – the Durban Review Conference – was held to examine global progress made in overcoming racism and to renew international commitments to anti-racism.  This is time it was the UN High Commissioner for Human Rights, Navi Pillay, who issued a statement expressing shock by the United States’ decision not to attend. The United Nations focus on racial discrimination when it passed a resolution against the brutal slavery system. Photo Credit: thesop.org

On December 17, 2007, the UN also passed resolution 62/122, declaring March 25 the annual International Day of Remembrance of the Victims of Slavery and the Transatlantic Slave Trade to recognize  the 15 million Africans who suffered the brutal slavery system that lasted over a 400-year span: four Africans crossed the Atlantic for every one European from 1501 to 1830, according to the UN. This year’s theme is “Forever Free: Celebrating Emancipation.” Though 2013 is the 150th anniversary of the 1863 Emancipation Proclamation, the U.S. was a bit late to join the international community to denounce slavery. This year also note many key anniversaries in other countries, including 180 years since the Slavery Abolition Act of 1833 ended slavery in Canada, the British West Indies and the Cape of Good Hope; and 170 years since the Indian Slavery Act of 1843. Slavery was also abolished in 1848 in France and in 1853 in Argentina.

The United Nations focus on racial discrimination with another related program that you may never hear about is the International Coalition of Cities against Racism, an initiative launched March 2004 to “establish a network of cities interested in sharing experiences in order to improve their policies to  fight racism, discrimination, xenophobia and exclusion.” The reason you’ve never heard of this international network of more than 500 cities is because there are no U.S. cities participating. In fact, the only North American participants are the Canadian Coalition of Municipalities against Racism and Discrimination. The network’s other five regional coalitions include the Arab region, Africa, Asia and the Pacific, Europe, and Latin America and the Caribbean.

D.A. Barber is a regular contributor to RaceReport.com