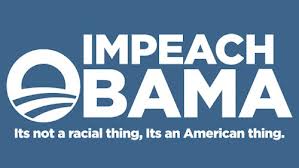 Is the latest movement to impeach President Obama because of the executive orders to curb gun violence, just another excuse to expression of racism, or being a red-blooded American? Is it just a disagreement? Or, it is just another another step in the ongoing effort to not support the President on anything?

After Colin Powell condemned the GOP’s repeated use of racial code words to oppose President Obama and rally white conservative voters, during an appearance on Meet The Press January 13, nothing much has changed. Now Republicans and pro-gun advocates outraged over President Obama’s 23 executive orders to curb gun violence are calling for impeachment.

Powell noted “a dark vein of intolerance in some parts of the party” that still “look down on minorities.” Without actually mentioning names, Powell singled out former New Hampshire Gov. John Sununu for calling President Obama “lazy” after the president’s first debate. “Now, it may not mean anything to most Americans, but to those of us who are African Americans, the second word is shiftless and then there’s a third word that goes along with that,” said Powell.

He also slammed Sarah Palin for using the slavery-era terms “shuckin’ and jiving,” asking, “Why do senior Republican leaders tolerate this kind of discussion within the party?”

So, is “impeach” a code for something?

Rep. Steve Stockman (R-TX.) was one of the first to threaten impeachment against President Obama, stating “I will seek to thwart this action by any means necessary, including but not limited to eliminating funding for implementation, defunding the White House, and even filing articles of impeachment.”  Later he said he hoped Congress and the courts would limit the president’s gun control measures. “However, if they do not or are unsuccessful I will consider speaking with my colleagues and filing articles of impeachment,” Stockman said in a statement. “Any proposal to abuse executive power and infringe upon gun rights must be repelled with the stiffest legislative force possible.” Other mostly southern Republican lawmakers and activists have called for impeachment based on the “abuse of power” theme, prompting Rep. Paul Broun (R-Ga.) to hint at “a chance of having a revolt all across this country.”

Larry Pratt, executive director of Virginia-based Gun Owners of America, sees President Obama as a dictator whose “administration seems to view the American people as the enemy.”  Pratt, who is a proponent of the “Impeach Obama” movement, denies being a racist though he was campaign co-chairman in 1996 of Pat Buchanan’s presidential bid that tried to organize the white supremacist and militia group vote.

Though the movement to impeach Obama has been around since early in his first term, it re-emerged days after he won a second term when the Conservative Majority Fund (known for its “birther” views) launched a robocall campaign to gain support for Obama’s impeachment. But now impeachment talk is spreading from the fringe websites, that include Alex Jones’ Infowars.com website and the Policy Issues Institute’s Impeach Obama site, to more mainstream Republicans.

Meanwhile, a coalition of anti-Obama Facebook groups are planning to fly an “Impeach Obama” Banner over this year’s Super Bowl, as well as flyovers of other cities and events. The groups, Impeach Obama Tea Party, Stop Obama Now-San Diego, and Boycott Oprah, are also considering expanding with an “Impeach Obama/Holder” banner, pulling Attorney General Eric Holder in as a target.

It is interesting that these three Facebook groups seem to find common ground in opposing President Obama and Attorney General Eric Holder along with Oprah, while they seemed to have missed Vice President Joe Biden who was the actual architect of the new gun initiatives. There must be a connection we’ve missed.

D. A. Barber is a regular contributor to RaceReport.com.