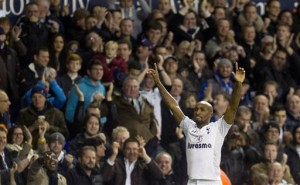 Football likes to call itself “the beautiful game.” That will not and cannot be true as long as some of its fans remain so disgusting.

Singing “Adolf Hitler, he’s coming for you,” mimicking the hiss of Jews being gassed in the Holocaust, making “hou, hou, hou” monkey sounds and acting like gorillas when black players have the ball, brutalizing other fans with fists, knives and iron bars. Each season, the list of vile behavior at and around football grows only longer.

Each time, football tells us the vast majority of its fans are decent folk and that hooligans are a small — even dwindling — minority, which all seems true.

Each time, club owners, managers and administrators say such outrages are intolerable, which is what was said after anti-Semitic abuse at Tottenham-West Ham last Sunday. Investigations are launched. “NO RACISM” jerseys are printed for players to wear, as they were Tuesday by Lazio’s team in Rome after hooligan violence and anti-Semitism there. Fines are handed down to clubs and countries — a token, cosmetic gesture that does nothing to hurt the perpetrators.

And each time, the business of football marches on. Around the world, the sport has erected glittering cathedrals of worship to itself, modern stadiums with hot food, clean toilets and stewards in fluorescent jackets to direct fans to seats, make them feel safe and keep the peace. Together, all this and rivers of television and sponsorship money have moved football upmarket from its working-class roots. It wouldn’t be fair to those who live off football financially and emotionally if matches, clubs or competitions were suspended for each hooligan incident, although it might leave hooligans short of alternatives to occupy their tiny minds. So the show always goes on.

But football will never be a respectable sport as long as it continues to provide a refuge — even if it’s an unwilling refuge — for the scum at its fringes. There is no hooliganism at cricket matches. English rugby fans don’t make monkey sounds at the All Blacks. At the Olympic Games, spectators don’t chant “Juden,” as some fans reportedly did when Lazio played Udinese in the Italian league Tuesday.

In Formula One, no one yells that fans are “on their way to Auschwitz,” which is what supporters of London club Tottenham have complained of hearing again this season from opposing fans when traveling to games. Hooliganism is a disease of societies but one that brings out puss-filled boils in just one major sport — football.

I’ve heard all the excuses about why that is and have grown tired of them, because they is no excuse for not doing more, much more, to stamp out all of this repeated ugliness.

One excuse is that football is a victim, not the cause, of hooliganism, that football’s tribal culture pitting teams and their fans against each other unfortunately attracts vile people who are out there in society anyway. But that culture can make people vile, too. Not all those who chant about the Munich air crash that decimated Manchester United’s team in 1958 or who sing about the Hillsborough stadium crush that killed 96 Liverpool fans in 1989 can be violent hooligans, but overheated football rivalry does turn all of them into idiots.

Another oft-heard excuse is that hooliganism infects football in particular because of its working-class origins, that it was once played and watched largely by factory workers. That is grossly offensive, because of its nasty suggestion that people are thuggish and badly brought up because they’re blue collar. One common trait of hooligans and those who join anti-Semitic or racist chants has nothing to do with class but everything to do with cowardice — these people are vile in public when they have strength in numbers and are lost in the relative anonymity of a large football crowd.

Often there is no logical explanation. One of West Ham’s millionaire owners, David Gold, is Jewish. His wealth and that of co-owner David Sullivan has helped bankroll the east London club. Yet a small but still significant pocket of West Ham fans, several hundred, according to London Telegraph journalist Jonathan Liew, chanted about Adolf Hitler. That, supposedly, was to rile Tottenham’s Jewish fans. But West Ham’s chairman is also Jewish and Hitler’s bombers killed thousands of people in London’s East End in World War II. It all makes no sense.

Gold said he didn’t hear the chanting from where he was watching, in the VIP box at Tottenham’s White Hart Lane stadium.

“If I had, then I’m sure I would have been mortified,” he said.

As a kid growing up in the East End in the 1930s and ’40s, Gold says he was taunted and beaten up because of his Jewish background. His great-grandfather hung himself in the men’s toilets of his synagogue, driven to suicide, Gold says in his biography, by anti-Semitism he faced in England after moving there to escape persecution in Poland.

West Ham maintains that only a handful of fans were involved. Gold wrote in the Daily Mail that he and Sullivan are leading their investigation. The club is working with the Football Association and Tottenham to try to identify offenders and Gold said West Ham will ban them from its stadium. One fan already has been barred.

But there will be more incidents, more chanting, more games where black players hear monkey sounds, more attacks like the one last week on Tottenham fans by masked thugs in Rome who wielded knives, metal bars and stones and reportedly shouted “Jew.”

Because that is football.

Not all of football.

But always enough to prevent it from the being the beautiful game it claims to be.

John Leicester is an international sports columnist for The Associated Press. Write to him at jleicester(at)ap.org or follow him at http://twitter.com/johnleicester