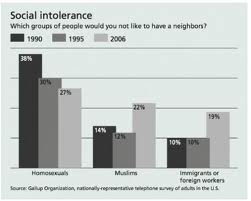 She proclaims to be a missionary, spreading the word of Christ around the world. Missionaries are known to do good things. But is espousing intolerance one of them?  At any rate, this missionary has served in exotic lands, where centipedes grow to a foot in length and natives survive on the bounty of land and sea.

But discomfort came about when she began to cast veiled aspersions upon those of the Muslim faith. Social circumstances were such that one could not express what he or she might feel about intolerance, but it was difficult not to make a veiled allusion about a brilliant nephew-in-law, which she probably would like anyway because he was Muslim.

A few weeks later, the same pious missionary made more disparaging remarks about minorities, especially those with skin color darker than her own. It was at the height of the political season, and having been raised not to discuss politics or religion at social gatherings, only polite observations were made and the subject of conversation was changed.

Not long thereafter, gays and lesbians became part of her dislike-filled (perhaps even hate-filled) focus.  So now, at least half the people in the world are excluded from her Gospel-spreading embrace.

There was more to come, however. In this social setting, in which it was difficult to extricate oneself, the topic turned to movies and then to Hollywood.  Soon, it was clear that in addition to Muslims, minorities, and people not heterosexual in their preferences, she disliked the Hollywood crowd. “They’ve all been married five or six times.”

It was posed to her the possibility that the divorce rate in Hollywood was no worse than the rate for the nation in general. Actor, Alan Alda, was offered as an example who has been married to the same woman for more than a half-century.Clearly, she believes one cannot be simultaneously Christian, liberal and moral. Why are these perceived as antithetical terms? And, the real question is, “How extensive is this kind of thinking?”What do you think?