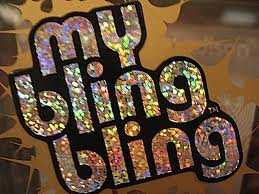 How folks perceive what constitutes their own economic status is deep seated. But rating others’ status is still drenched in stereotype of who likes bling.

“Anyone who is feeling low in status is going to try to compensate. And in our capitalistic, consumption-oriented society, one way to compensate is to buy high-status products,” says Philip Mazzocco, assistant professor of psychology at Ohio State University.

The perception is that urban racial minorities spend a larger portion of their incomes than do whites on “conspicuous consumption” of expensive stuff that imply higher status. In other words, bling. But Mazzocco is lead author of a new study that claims to show that whites will also crave expensive, high-status bling if they imagine themselves as low-status. “It is a basic psychological tendency that we all share when we’re feeling inferior in some part of our life,” Mazzocco said.

The problem is that the results are based on white people imagining themselves as being black or low-status, and it says more about racial stereotyping than conspicuous consumption.

Mazzocco conducted four experiments and published the results in the Journal of Consumer Psychology.

In the first experiment,146 adults –half white and half black –rated positively or negatively ten products. Five of those products were high-end stuff and five were “low in status” such as vacuum cleaners and unbranded shirts. While the blacks more positively rated the high-end, bling,  products than did whites, those blacks who considered their race important to their identity rated the high-end products higher than blacks who had lower racial identification. Mazzocco’s conclusion: “Because African Americans are seen as lower in status in our society, those who identify more strongly with being black are more likely to compensate by seeking high-status [i.e., bling] goods.” Who Likes Bling? It depends on self perception of status
Photo Credit: taisports.wordpress.com

D. A. Barber is a frequent writer for RaceReport.com and USAonRace.com