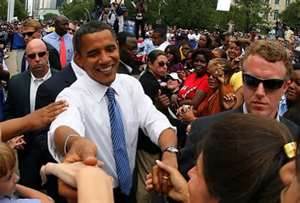 WASHINGTON (AP) — When black U.S. voters gave President Barack Obama 93 percent support on Election Day in defiance of predictions that they might sit it out this year, black leaders breathed a collective sigh of relief.

That encouraged those leaders to try to leverage more attention from both Obama and Congress. Although they waver over how much to demand from the president — particularly in light of defeated Republican challenger Mitt Romney’s assertion that Obama gave “gifts” to minorities in exchange for their votes — they are delivering postelection wish lists to the president anyway.

“I think the president heard us loud and clear. The collective message was, ‘Let’s build on where we already are,'” the Rev. Al Sharpton told reporters after a White House meeting last week with a collection of advocates representing largely Democratic constituencies.

Specifically, Sharpton said, that means keeping the brunt of the looming “fiscal cliff” of tax increases and spending cuts off the backs of the middle and working class.

“We need Republicans to think hard and to pull back from the cliff 98 percent of our families, who make up the bulk of this nation, from seeing our taxes being raised,” Jealous said.

Blacks made up 13 percent of the electorate this year, about the same as 2008, while participation among whites shrank slightly to 72 percent and Hispanics increased to 10 percent, national exit polls showed. Black leaders point to that minority participation as they sharpen their calls for initiatives to address black unemployment, which was 12.7 percent when Obama took office, peaked at 16.5 percent roughly a year later, and stood at 14.3 percent in October. The overall unemployment rate is 7.9 percent.

National Urban League President Marc Morial acknowledged in an interview that “we sweated turnout all the way to the end,” because the country’s underlying economic conditions made it tougher to mobilize black voters. Within days of the election, Morial sent to Obama, House Speaker John Boehner and House Minority Leader Nancy Pelosi an “urgent petition” asking that Obama’s second term focus on economic opportunity and income inequality.

A jobs program should emphasize infrastructure and public works, broadband technology and energy “with a special focus on those communities where unemployment is and remains stubbornly and persistently high,” Morial’s letter said.

“We who represent the nation’s urban communities will demand a seat at the table in these discussions,” he wrote.

African-American voter samples in national exit polls are not useful for providing turnout measurements. Census surveys and other analyses eventually will provide turnout numbers for specific racial groups. But exit polls can be used to examine different groups as shares of the overall vote. And there, experts say, is where the evidence can be found of how much black voters delivered for Obama.

Nationally, Obama’s share of the black vote was down slightly from four years ago. But in some key states, turnout was higher and had an impact, said David Bositis, an expert on black politics and voting at the Joint Center for Political and Economic Studies.

Blacks made up 15 percent of the electorate in Ohio, up from 11 percent in 2008. And 97 percent of those votes went for Obama, leading Bositis to say Obama’s margin of victory in the state came from black voters.

“Michigan was one of the states the two parties jostled around, and eventually Republicans decided they were not going to win, and one of the reasons was the big increase in the black vote,” Bositis said.

In Missouri, a state Obama lost in both elections, the black vote went from 13 percent to 16 percent of all voters.

Women and people from ages 18 to 29 had the strongest participation levels in the black community.

In 2008, black women had the highest turnout rate, 69 percent, of all groups. Their 2008 record created a sense of obligation among some black female leaders to take an active role against new state voting laws they said threatened to curb black voter participation. Black women made up 60 percent of the black vote this year and voted 95 percent for Obama.

The enthusiasm of black women was demonstrated in Florida when more than 250 churches marched their congregations to the polls as part of the “Souls To the Polls” early voting campaign, said Melanie Campbell, president and CEO of the National Coalition on Black Civic Participation. A large percentage of the marchers were women, Campbell said.

“Countless women stood in line for hours to vote early so they could volunteer to work at the polls to help in the fight against voter suppression,” Campbell said.

Black voters ages 18-29 made up 26 percent of the black vote nationally, a turnout close to what it was in 2008, according to the national exit poll. They voted 91 percent for Obama.

Republicans had reached out to black voters in 2004 and saw their share of the black vote increase in that election, Bositis said. But he said that in 2012, the outreach was nonexistent.

Michael Steele, former Republican National Committee chairman, said the Republican Party had an opportunity this election to connect with black voters on unemployment, health disparities, incarceration and other issues.

“How the heck do you win if you don’t engage in the conversation?” Steele said.