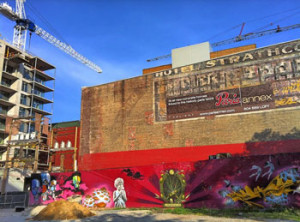 A battle is brewing in Detroit over whether the city’s long-term urban revitalization project is the best it can be at balancing quality-of-life and quality-of-business. While the plan is progressive in developing “green” initiatives and improving neighborhoods, the folks at Sierra Club”s Environmental Justice and Community Partnership Program are concerned it doesn’t adequately address environmental justice issues within low income communities made up primarily of minorities.

The 50-year “Detroit Future City” is a forward looking plan that focuses on job growth, land use, neighborhood improvement, and rebuilding infrastructure, including an integrated public transportation system. There are serious plans to spruce-up Detroit’s rundown neighborhoods into viable green spaces and develop a more green infrastructure.

But the Sierra Club”s April 4 “State of Detroit’s Environment” report warns that the plan ignores industrial emissions and that the city, with industrial hubs that include an oil refinery, coal-fired power plant, and steel plants, cannot plan for the future without addressing the health impacts on residents. Specifically, the report notes that most polluting industries are “located in communities principally comprised of people of color.” As beautiful as the Detroit skyline is at night, how dangerous are the urban revitalization bet-online-casinos.com plans for minority communities? Photo Credit: annharbor.com

The report cites statistics that Detroit adults suffer from asthma 50 percent more than the state of Michigan as a whole, and hospitalizations due to asthma among black Detroiters is roughly twice that of white Detroiters.

“Before issuing permits for any new or modified facilities that emit toxic air pollutants in the city of Detroit, the Michigan Department of Environmental Quality must ensure that these facilities do not create disproportionate impacts on already burdened communities,” notes the report.

While the Sierra Club praises the proposals for creating “green” and “blue” spaces, the report notes that, “the basic plan to channel resources toward certain target areas of the city while neglecting others remains intact and fundamentally contradicts the principles of environmental justice.”