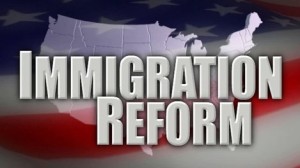 By Erica Werner and Janice Ellis
Will Senate hearings result in real immigration reform? Immigration reform has been an issue that has plagued this country for decades, affecting the lives of generations.

President Obama, in his State of the Union address, clearly emphasized that it is a priority and a bi-partisan Congress should move forward with deliberate speed to past meaningful and lasting legislation. Million of illegal immigrants have made critical contributions in the labor market, acknowledged or not, in maintaining and advancing many businessess and industries.

So let the process for a lasting solution begin and result in laws that realize real immigration reform. The fate of 11 million illegal immigrants and their extended families are counting on it. Countless businesses are also counting on it.

Lawmakers who are shaping the fate of the millions of people in the U.S. illegally were told by one Wednesday that it’s time to rewrite immigration laws so that they, too, can live the American dream.

“What do you want to do with me?” an emotional Jose Antonio Vargas demanded of senators. “How do you define American?”

The first Senate hearing on immigration policy this year pointed toward an emerging bipartisan consensus that the nation’s 11 million illegal immigrants should be offered a path to citizenship. But passionate divisions over the issue also surfaced as one Republican decried amnesty and shouting protesters interrupted the proceedings. “You really mean that we’re not going to have enforcement, but we’ve got to have amnesty first,” Sen. Jeff Sessions, a top Republican on the Senate Judiciary Committee, confronted the panel’s chairman, Democratic Sen. Patrick Leahy.Leahy and Homeland Security Secretary Janet Napolitano rejected the argument that border security must be the focus before a comprehensive immigration package or any pathway to legalization can be done.

“Too often the border security refrain simply serves as an excuse,” Napolitano said. “Our borders have in fact never been stronger.”

An immigration overhaul is a priority for President Barack Obama and lawmakers after a brutal election in which voters again elected a divided government. Democrats control the White House and the Senate, while Republicans hold the House majority.

But for all of the division and polarization in Washington, the hearing produced evidence of bipartisan agreement to fix what all agree is a broken system – and finally dispense with a wrenching issue that has bedeviled lawmakers for years.

Vargas’ testimony produced a striking moment in which one of the 11 million illegal immigrants at the center of the debate confronted the elected officials reconsidering the law.

A former journalist who acknowledged his illegal status in a high-profile piece in The New York Times Magazine in June 2011, Vargas recalled his journey to the U.S. from the Philippines in 1993. He told lawmakers that he never knew he was here illegally until he applied for a drivers’ permit, and that he lived for years in fear until he decided to go public and start an advocacy group. He has so far avoided deportation.

“Too often, we’re treated as abstractions, faceless and nameless, mere subjects of debate rather than individuals with families, hopes, fears, and dreams,” Vargas told committee members. “We dream of a path to citizenship so we can actively participate in our American democracy.” Democrats on the panel offered praise and encouragement. Republicans had little response.

For Vargas and others in his position the deliberations offered some encouraging signs mixed with unmistakable notes of caution.

Leahy declared in opening the hearing, “In my view it is time to pass a good bill, a fair bill, a comprehensive bill … Too many have been waiting too long for fairness.”

Republican Sen. John Cornyn said the focus must be border security. “I do not believe the border is secure and I still believe we have a long, long way to go,” he said.

Protesters interrupted the hearing several times, with some shouting and waving banners against deportations, which have increased markedly under the Obama administration despite its push to find a political accommodation for many who have been living in the U.S. Later people in another group stood and silently turned their backs to the dais where the senators sat. They wore signs on their backs reading “human rights” and “immigrant rights.” Leahy chided them for interrupting proceedings. Obama says he is determined to finally make good on his promise to the Latino community to sign into law a comprehensive immigration bill with border security, employer enforcement, improvements to legal immigration and a path to citizenship for illegal immigrants already here. Meanwhile, a bipartisan group of eight senators has been meeting to develop a bill by next month that accomplishes eventual citizenship for illegal immigrants while also containing enough border security and enforcement measures to gain conservative support.The four Democrats in the Senate negotiating group met with Obama at the White House on Wednesday, telling him they were confident a bipartisan bill could be agreed to “in the coming weeks,” a senior Democrat said later, speaking on condition of anonymity because the meeting was private. A White House statement said Obama reiterated his intention to offer legislation of his own if Congress fails to act, and told senators that continuing to strengthen the border should not be mutually exclusive from a pathway to citizenship.The Senate bipartisan plan makes a pathway to citizenship conditional on border security first, something on which Republicans have insisted. Obama’s immigration proposals don’t make that linkage, and it’s emerging as a point of contention.

The bipartisan Senate negotiators are operating separately from the Senate Judiciary Committee, but the committee would probably vote on any legislation they produce. First, numerous thorny issues would have to be solved. Questions Wednesday touched on how to define border security, how to structure a future worker program, how to ensure employers can and will verify the legal status of their workers, and how to craft a path to citizenship that would not advantage illegal immigrants over those attempting the process legally.

The action comes in a rapidly shifting political environment. Polls find more Americans support eventual citizenship for illegal immigrants and many Republican leaders are coming around to the same view after their party’s dismal showing among Latino voters in the November elections.

But, as the hearing made clear, deep divisions exist within the Republican Party that could threaten any legislation in the Senate, where Republicans hold enough votes to stall legislation, or in the House, where majority Republicans are waiting to see what the Senate does before taking any action.

Republican Sen. Lindsey Graham, a Judiciary Committee member who is part of the bipartisan “Gang of Eight” working on an immigration bill, drew out Napolitano about the urgency of quick action on immigration legislation.

“Have you ever seen a better opportunity than the moment that exists today to pass comprehensive immigration reform?” Graham asked.

“No, this is the moment,” Napolitano replied.”Do you agree with me that the pay-offs for the nation are enormous?” Graham asked, citing improving the economy and national security.

“I couldn’t say it better than you just did,” Napolitano said.

But not long after, Sessions made clear that those who think the time is ripe for will face determined opposition.

“There’s a lot of overconfidence about this bill,” Sessions said. “If it doesn’t really work it’s not going to pass, we’re going to expose it.”